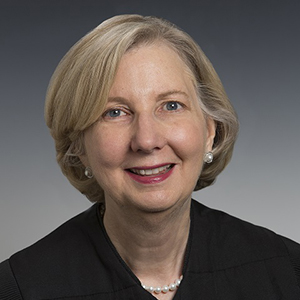 Former Alaska Supreme Court Chief Justice Dana Fabe has been named recipient of the 2017 Sandra Day O’Connor Award for the Advancement of Civics Education, presented annually by the National Center for State Courts.

The award honors an organization, court, or individual who has promoted, inspired, improved, or led an innovation or accomplishment in the field of civics education related to the justice system. The award will be presented August 8 in Philadelphia during the annual meeting of the Conference of Chief Justices and Conference of State Court Administrators.

Justice Fabe was selected for her decades-long commitment to promoting, inspiring, nurturing, and leading countless efforts in civics education. One of her most notable achievements was her role in supporting and expanding the Supreme Court LIVE program, which brings oral arguments in actual cases to high school students in various parts of the state. In the past seven years, 55 volunteer attorneys, 63 teachers, and thousands of Alaskan students have participated in this program.

A few of Justice Fabe’s many achievements include:

Justice Fabe was the first woman to serve on Alaska’s highest court when she was appointed in 1996, and in 2000 she became that court’s first female chief justice. She retired from the bench in 2016 but continues much of her work in civics education.

The award is named for retired U.S. Supreme Court Justice Sandra Day O’Connor.  Justice O’Connor, the first woman to serve on the U.S. Supreme Court, retired in 2006, and has since become a leading advocate for improving civics education in our nation. She established iCivics, a program that uses web-based educational tools to teach civics education and to inspire students to be active participants in our democracy.