District Court Judge Elizabeth “Libby” Hines from Ann Arbor, Michigan has been named recipient of the National Center for State Courts’ (NCSC) 2018 William H. Rehnquist Award for Judicial Excellence, one of the highest judicial honors in the country.  While Judge Hines’ work is far-ranging, she is most recognized for her groundbreaking work in domestic violence.

Presented annually by the National Center for State Courts, the Rehnquist Award honors a state court judge who demonstrates the outstanding qualities of judicial excellence, including integrity, fairness, open-mindedness, knowledge of the law, professional ethics, creativity, sound judgment, intellectual courage, and decisiveness. The award will be presented to Judge Hines by the Chief Justice of the United States John G. Roberts, Jr. during a ceremony at the U.S. Supreme Court November 15. 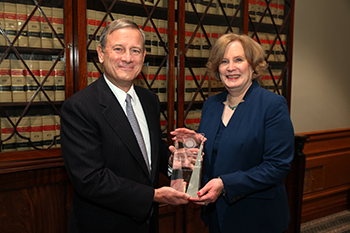 Judge Hines’ work has shaped the way many courts handle domestic violence cases. In the early 2000s, she was appointed to represent her court on an executive committee that managed a Judicial Oversight Demonstration Initiative sponsored by the U.S. Department of Justice Office on Violence Against Women, one of only three sites in the country selected to find what court practices work best in domestic violence cases. This was a five-year-project, and today Judge Hines’ court serves as a national resource for the handling of such cases.

Judge Hines was elected to Michigan’s 15th Judicial District Court bench in 1992. She currently serves as co-chair of the American Judges Association’s Domestic Violence Committee. She has served on the NCSC Board of Directors and was awarded the first Judicial Excellence Award by the Michigan District Judges Association. She received her bachelor’s degree from the University of Michigan and her juris doctorate from the University of Michigan Law School.