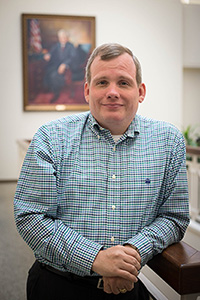 Bill loves process -- what he calls “internal mechanics” -- so it should come as no surprise that he’s more interested in what’s happening in a court clerk’s cubicle than in a law firm’s board room. He is a native New Yorker – born in Rochester and reared in Queens – who, after he received his undergraduate degree, discovered his passion for court administration when he worked as a paralegal.

What was the one decision you made that changed the course of your life? After Fordham, I worked as a legislative aide for a New York state senator (Norman Levy). After one year, he died, and I started asking myself the question, “What do I really want to do with my life?” I was one of those kids who was always told I should become a lawyer, I guess, because I talked a lot, so after the senator died, I got a job as a paralegal at a law firm to see if I’d like to become a lawyer. I was in courthouses about 30 hours a week, mostly handing in motion paperwork to court clerks, and after a year of that, I realized I was more interested in what was happening in the courthouses than what was happening in my firm’s law office. So that took me in this direction.

What do you like most about what you do here? There’s never a dull moment. There’s never a day when I’m not amazed at the questions we get, positive and negative. I love having a 50,000-foot view of our nation’s courts.

What do you mean by that? One day I’m getting a call from the clerk of courts in Newport News. The next day I’m talking with a chief justice. You get the local perspective and the national perspective. You see it all.

Tell me something about yourself that few people know. I worked as a reporter at WFUV at Fordham University in the Bronx, where I got my undergraduate degree. I was there for two years, my junior and senior years, and I worked hard to keep that objectivity, to provide people with accurate information. What they did with it was up to them. And that’s pretty much what I do now. …There was a review of Gavel to Gavel that described it as “very useful and non-ideological.” If I could choose my epitaph, it would be, “He was very useful and non-ideological.” (Laughs.)

Excluding work, what are you most proud of? My kids, Liam, 9, Rory, 8, and Anna, 6. … And I love working with Little League Baseball. I was never good at baseball. …My boys play, and I help with dugout control. I call it crowd control. When it’s our time to bat, I’ll tell the kids where they should sit and stand before they go up to bat.

What do you like most and least about living in Williamsburg? Most, the close proximity to everything. Least, not much, but it’s an overbuilt community with an underthought transportation system.

Is there anything about you that surprises people when they hear about it for the first time? I was a security guard at the Metropolitan Museum of Art my first two years at Fordham. I was assigned to the Egyptian section and to the costumes section, so I have an amazing amount of knowledge about Egyptian art and about Versace because they had a Versace exhibit when I was there. I know that Versace was a genius. That’s what the museum said. (Laughs.)

You probably have a lot of great stories to tell from that job. One time Danny DeVito and Rhea Perlman and their kids came to the Egyptian section, and they were touching a stone sarcophagus, and I had to say, “You can’t touch that.” And he said, “I’m so sorry.”

Anything else? I’m a huge fan of Law & Order, and one night a guy in a Law & Order crew (baseball) cap walked in with his son, and he said they wanted to see William the Blue Hippo, which is the unofficial mascot of the Met. (Bill has a William the Blue Hippo figurine on his desk.) That section was closed at night for staffing reasons, and I said, “I’m a big fan of Law & Order, but I’m sorry, that section is closed to the public.” I looked at the little boy, and he looked disappointed, so I said, “OK, I’ll take you there.” When they left, the guy (who turned out to be the show’s props manager) asked me for my address. A few days later, a FedEx package arrived with a Law & Order crew cap inside. I still have it.

Do you miss New York City? No, I don’t. It’s fun. It’s exciting. But New York City is a young person’s game. If I had a passion for New York City and everything it has to offer, then maybe I’d be there, but I have a passion for what I’m doing here. Not many people have written a dissertation in court administration. That should tell you something about me.