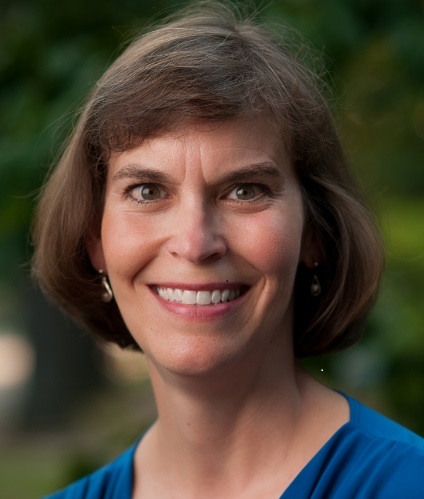 Diane worked at the Arkansas Administrative Office of the Courts for 13 years, including nearly four as director of its Office of Research and Justice Statistics, so she was no stranger to many NCSC employees when she started working here earlier this year.

As a researcher, she focuses on data governance and national data collection and on projects that help courts protect vulnerable people. Diane, who is from Houston, works from her home in Conway, Ark., where she also serves on the school board. Keep reading to find out why she moved to Poland after college, why she decided to learn German, and who she saw in Moscow’s Red Square.

Your father taught political science, and your mother was a certified public accountant. Did you ever want to be a teacher or a CPA? No, I never did. But there were a lot of public policy and politics discussions around the dinner table, so that might help explain why I chose this career.

You wanted a career in public policy for as long as you can remember? No, I wasn’t considering data governance when I was six years old, believe it or not. (Laughs.)

What did you think you wanted to do back then? For years, I thought I wanted to be a veterinarian. During the summers and during Christmas breaks in high school and college, I worked as a surgical assistant for an oral surgeon. It seemed like a lonely occupation, but working there was the best job a teenager could want. I was making a lot more money than someone working at a fast-food restaurant or at the mall, and it was super interesting. I was assisting with surgeries, taking x-rays, filing insurance forms, and balancing the books at the end of the day. I’m not sure why I was allowed to do all of those things at that age. (Laughs.) …I’m one of those people who when I was 10, I was 40.

So how did you end up doing what you’re doing? I was foreman of a jury that convicted a man of sexual abuse. He was self-represented, which meant he was questioning the victims (teenage girls) himself. Shortly after that trial, a friend asked me if I’d be interested in serving on the founding board of the local Court Appointed Special Advocates (CASA) program. (CASA helps abused and neglected children find permanent homes that are safe and healthy.) Because of that jury experience in the criminal system, I recognized the importance of helping children in the courtroom in child welfare cases, and that led to my position as state director of CASA working for the Arkansas AOC.

During your time in CASA, is there one child you can’t stop thinking about? One of my CASA kids who I worry about is a teenage girl I met when she was 16. We had two different adoptive homes for her, but she was not emotionally equipped to be part of a family. She finished high school and started college – two good things – but she was not able to be successful in college. She wasn’t well prepared for it, and she dropped out. I still think about her a lot.

What’s the hardest decision you’ve had to make as a school board member? The thing I hate the most are the expulsion hearings. They’re the hardest and worst parts of the job. Usually the decisions are clear cut. The kid shouldn’t be in school. But when you expel someone, you realize he’s not going anywhere. He’s still going to be a part of your community, and you wonder what he’ll be doing.

Who do you admire most, and why? Probably Barbara Jordan. She was the first Southern African-American woman elected to the U.S. House of Representatives (in 1972). She was a leader in the impeachment proceedings against Richard Nixon. She was an amazing orator. She came from the Fifth Ward in Houston, a very poor area, and she was a powerful voice and amazing leader I remember from my childhood. There weren’t a lot of female leaders in Houston back then, but she was one.

Have you ever met anyone famous? If so, who was it, and what were the circumstances? I have the worst visual memory and could be sitting right next to someone famous and would never know it. …George (H.W.) Bush came into my father’s classroom to talk when I was a child. That’s when he was a congressman from Houston. And I saw Ronald Reagan and Mikhail Gorbachev in Red Square. I was a Russian minor in college, and I was there for a study abroad program. I didn’t meet them, but I saw them there.

How long have you spoken German, and why did you decide to learn it? My husband is a retired German professor. He and our daughter would speak it at home, and I had to learn it for self-defense. (Laughs.) We lived in Germany for a total of one and a half years on two different occasions. Our daughter is living there now. She’s taking a gap year, so I’m continuing to study German.

What’s something about you that surprises people when they hear about it for the first time? I was a Peace Corps volunteer in Poland, and I lived there for two and a half years (from the summer of 1991 to the end of 1993). My assignment was teaching English to high school students, and I wrote a career development curriculum for Polish kids. It was right after the fall of Communism, and people didn’t know the opportunities available to them after high school. Joining the Peace Corps was one of the best things I ever did. I got to see the world. When I left Poland, I took the train all the way to Hong Kong – from Warsaw to Moscow to Beijing and then to Hong Kong. I’ll never forget that, though January may not be the best time to do that. …The Peace Corps is wonderful because everyone should know what it’s like to be a foreigner. It gives you perspective and teaches you empathy, hopefully.