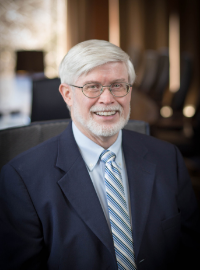 Jim was the original IT director for the Arizona Supreme Court, and in 1982 the court received a $25,000 federal grant to buy word processing equipment for the Arizona Court of Appeals. He and an appellate court judge were assigned to work together to figure out the best way to spend the money. The judge? A former Arizona state senator named Sandra Day O’Connor. “We went to a lot of meetings together,” Jim said, “and my claim to fame is that Sandra Day O’Connor was my chauffeur.”

What was she like? Ridiculously brilliant. One day we had to make a presentation to the court officials about how we planned to spend the $25,000, and I thought she was going to say a few words and turn it over to me, and I would present the technical side. Oh, no! Off the top of her head, she went point by point and delivered a perfectly presented talk. That was one of those times in your life when you just sit back and say, “Wow. This person is really, really smart.” …Twelve years later, I was in Washington, and I made plans to see her at the Supreme Court, and when she saw me, the first thing she said was, “Hi, Jim. Why don’t you have e-filing up and running?” (Laughs.) Here she is on the U.S. Supreme Court, but she’s still keeping up with what I’m working on!

You’re associated with New Mexico because you went to college there. Were you born there? No, I was born in Schenectady, N.Y. My father was a nuclear physicist, working up there. He was actually one of the first computer scientists in the nation. Then he got a job at Argonne National Laboratory, so we moved to Chicago. We moved to New Mexico in 1962, when he got a job at Los Alamos (National Laboratory).

What did you want to be when you were a kid? I thought I wanted to be a lawyer, but the more I learned about it, it really wasn’t that interesting to me.

What one decision did you make that changed the course of your life? Going to New Mexico State (University). I went there because it was the furthest state university from where I lived – at least a five-hour drive -- and it was cheap. It was where I met my wife, who was from Las Cruces, (where New Mexico State is located). And I had a professor who once held up a book called Managing the Courts. I thought, “That sounds interesting.” I borrowed the book and read it, and that was always in the back of my mind, that I might want a career in the courts.

Your father was a nuclear physicist who worked with technology, and you’re passionate about the courts, and you work with technology. Yes. My family has this weird connection between technology and subject matter. My son was a political science major, and he has a company (BuzzMaker) that does internet political campaigns all over the world (in 21 countries and five continents). It’s three generations.

Tell me something about yourself that surprises people when they hear about it for the first time. I competed in the Soap Box Derby World Championship in Akron, Ohio, in 1965. I was 11, and I was a local champion in New Mexico. Fast forward to the 1990s, my son was a local champion who went to the Soap Box Derby in 1996 and 1997, and my daughter was a champion who went to the derby in 1997.

You’ve lived in Williamsburg since you got to the Center in 1990. What do you like most about it? It has all the advantages of a big city without being a big city. There are taxis, trains, hospitals, a college, and just about any kind of restaurant you could want.

You’ve been all over the world. What’s the most interesting place you’ve visited? Ulaanbaatar, Mongolia. I was there for a project in 2008. It’s really hard to get there. There’s one airline arrival a day. At least there used to be. One morning I was looking for a place to eat, and I found this giant, giant place where there was a giant statue of Genghis Kahn, and it was very windy and cold as heck, and these poor guys were outside trying to sell art. I felt sorry for them so I bought three pieces for 20 bucks, and I tipped them. …When I was there, I met a guy who turned out to be a guest conductor for the Mongolian National Symphony. He was from Boston. It’s crazy who you run into.

Any regrets? I’m good. I’ve had a ridiculously good life. Sometimes I feel like I need to apologize for that up front.