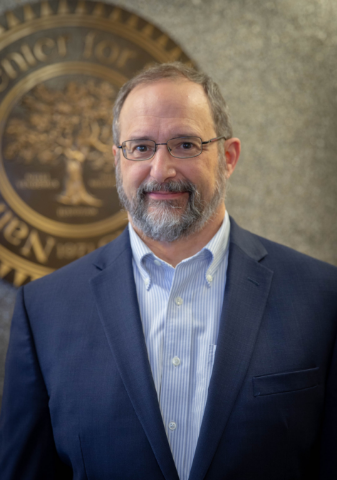 John, who grew up in western North Carolina, always liked working with his hands and thought he wanted to be a mechanical engineer, but it didn’t work out that way. He ended up with two graduate degrees – one in English and one in library science – and worked as a librarian in Columbus, Ohio, for 27 years before he arrived at NCSC last year. To find out about an interesting job he had in northern Japan, who he admires the most, and where he had the best pork chop in his life, keep reading.

What did your parents do? My dad was a high school band director and a ranger on the Blue Ridge Parkway, and my mom taught English at WCU (Western Carolina University).

Did that influence what you wanted to do when you were growing up? I ended up going into English, so I guess I was influenced by my mom. I started out as a mechanical engineering major, but calculus just killed me, so I switched to English. I like to work with my hands, and I thought mechanical engineering would allow me to do that, but it isn’t about that. It’s about calculating static and dynamic loads. That sort of thing. But I never got that far.

Who do you admire most, and why? I don’t have a favorite, but Soichiro Honda comes to mind.  He started out in the late 1930s with an order of piston rings for Toyota.  His first shipment didn’t meet their quality specs, so he got the education he needed to improve.  Honda later went on to dominate motorcycle racing in the 1960s, beating long-established European makers with truly innovative engines that were powerful and reliable. His company got into automobiles with the money made by selling motorcycles in the 1960s and 1970s.  The rest of the story we all know with Honda cars.

So should I assume you own Hondas? I have a Honda Civic, two Honda motorcycles, a Honda mower, and a Honda generator. I needed the generator not long after I moved here.

What do you collect, if anything, and why? I’ve always loved ceramics.  If I had more money that I knew what to do with, I’d collect art pottery from the early 20th century.  Realistically, I have a few pieces of Hall that came as a bonus when anyone bought a new Hotpoint or Westinghouse refrigerator.  Hall and other makers made promotional sets of ceramic pitchers, bowls, and storage containers in the late 1930s and 1940s.  They have a streamlined look and were made mostly in Ohio.  This was before imported and plastic kitchenware arrived, which wiped out most of the domestic ceramic houseware trade.  I like clocks too.  They measure time, which can’t be seen.  One only knows it’s there from its effects on other things.  I don’t think we know much at all about time.

What’s something interesting about you that few people know? In an earlier life I used to teach English conversation in Sapporo, Japan.  I taught all ages from school age kid classes, junior college classes, to individual private lessons.  The Japanese love to take classes after work. …The most interesting part was living in a country with fundamental differences from your own.  An executive from Hokkaido Bank once invited me into his home for dinner.  His wife, in formal kimono, served us but did not partake in conversation, staying in the kitchen and preparing all manner of dishes.  I remember quail eggs hard boiled about the size of a marble with tiny slivers cut uniformly so you could see the yellow yolk peeking through.  In the same room was a kerosene heater. Many Japanese houses, even in the far north, don’t have central heating.

What’s the most unusual request you received during your many years as a librarian? Someone called and asked me for a photo of the Santa Maria, (the largest of the three ships used by Christopher Columbus in his first voyage across the Atlantic Ocean in 1492). I had to explain that there were no cameras back then. It was an adult caller.

Have you ever met anyone famous?  If so, who was it, and what were the circumstances? Once, during a library conference in Chicago, I was staying at the Palmer House.  I walked in one evening and stumbled into a big video shoot with the Clintons during his first run for the White House.  I could see that they both had tons of makeup on and how bright the lights were. The other thing I remember about the Palmer House is that’s where I had the best pork chop I’ve ever had and probably ever will have.  …It was two inches thick and so good.

Do you still order pork chops, hoping for a better one, or did you give up on that quest? I’m done. I know I’ll never find a better one.