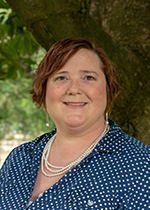 Julia Edwards-McDaniel, the curriculum developer for NCSC’s Institute for Court Management, was born in Japan and lived in Utah, Germany and California (in that order) -- all before she turned five. At age 7, her family moved to Virginia, where she has lived ever since. She lives in Hampton with her 9-year-old son, Lincoln, and her wife, Cindy. Read about her close encounter with a crabby soap opera actor named Tom Eplin, her admiration for the actress Drew Barrymore, and her desire to never again be serenaded with a Julie Andrews song. (No offense to Julie Andrews.)

What are the pros and cons of being a military brat? I don’t really know because I was young (7) when we moved to Virginia, but I do have some memories. In Germany, I remember a candy store and the dog next door. In Utah, I remember my friend, Danny, and this metal tub we played in. It was our swimming pool. (Laughs.)

What did you do after college? After college (Old Dominion University), I worked at an alternative school (in Hampton) for children with emotional issues. That was tough. From there, I worked for Child Protective Services. Which is something I said I would never do because I never wanted to face an abuser. That was something I usually did in a police station, but they trained us in worker safety. Things like positioning yourself so that the abuser was never between you and the door, and backing in to parking spaces so you could get out of there quickly if you needed to.

What’s something about you that surprises people when they hear about it for the first time? That I was born in Okinawa. My dad was in the Air Force, and that’s where he was stationed at the time. I’ve actually had people who hear that I was born there say to me, “You don’t look Japanese.”

What’s something interesting about you that few people know? I serve on the board of Chanco on the James. It’s a conference center and summer camp in Surry County that’s affiliated with the Episcopal Church. I also work with teenagers in a group called Happening.

Who do you most admire, and why? Drew Barrymore. She overcame her childhood experiences and has built her career not only around acting, but also with her own (makeup) business. She was constantly around drugs and alcohol since she was 8 and first went into rehab at 13. She seems to be doing very well now, and I admire her strength and her commitment to her family.

Have you ever met anyone famous? What was that like? Tom Eplin, who played Jake McKinnon in Another World (and As the World Turns). I was with my high school chorus coming back from New York from a spring break competition (in 1994), and we stopped at a truck stop somewhere, and he was eating in the truck stop cafeteria. Someone saw him, and we all went over to him. He was less than pleased. He looked annoyed and tired. I was excited at first and wanted his autograph, but I decided to leave him alone.

I know you go by Juli, and it’s spelled without an e. What’s the story behind that? My mother gave me that name when we were in Germany. Juli is German for July, and it’s pronounced you lee. I’m not sure when I knew the story behind that, but I started spelling my name Juli. Everyone wants to put an e at the end.

That must be frustrating. Yes, and my maiden name is Andrews. That was interesting – Juli Andrews. When people heard that, they would ask me if I could sing, and some people would start singing Sound of Music songs or songs from Mary Poppins. …Julie Andrews married a man with the last name Edwards (the director Blake Edwards), so her name became Julie Andrews Edwards. I just couldn’t get away from it. (Laughs.)