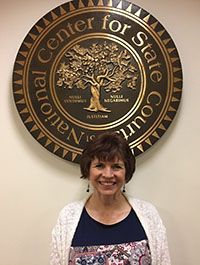 If you know Laura, you know she loves her grandchildren. It’s hard to believe there was a time when she didn’t want to be a grandmother. “I just looked at it as another responsibility that I didn’t necessarily want,” she said, “but there’s nothing more satisfying.” Read on to find out what she would grab from her house if it were on fire.

Outside of work, what are you most proud of? My kids and my grandkids. Not that I did anything, but they’re great. My family is the most important thing in my life.

What’s the one decision you made that changed the course of your life? Coming to work at the National Center. I was working at a nonprofit, in management, but I reached the point where I was looking for a more solid, stable nonprofit, with benefits. I saw an ad in the Denver Post (for a client services manager), and I was like, “What’s a state court?” (Laughs.) But I read the ad and knew I was qualified for the job. Other than my family, this job is the thing I’m most grateful for.

What’s one thing about you that surprises people when they hear about it for the first time? I ride a motorcycle. It’s a Yamaha 1900 Roadliner. It’s big. (It weighs about 750 pounds.) I started riding because my husband rode. It was sort of a whim, but then I started telling people I was riding, so I had to learn how. I’ve been riding for 10 years now, and it’s one of the most difficult things I’ve ever done.

For those of us who haven’t ridden a motorcycle, why is it so hard? You see people riding, and it looks so easy, but riding is a skill. When I started riding, I didn’t know the hand things were for braking and shifting. There’s a lot to learn. . . . I’ve ridden about 70,000 miles—all over the West and on just about every paved road in Colorado. I love to travel.

Where is the most exotic place you’ve visited? Mongolia. It was on my bucket list. International asked me to go (in 2011). I remember I was supposed to leave Mongolia and head home on a Saturday, but there was a big sand storm, and they wouldn’t fly, so they took me back to the hotel, and I ended up visiting a Buddhist temple and went sightseeing.

What’s something interesting about you that few people know? A lot of people know I lived in Tunisia and Egypt for eight years (in the 1980s). It was like looking at National Geographic every day, and I really enjoyed the people and learning a new culture.

What don’t they know about your time there? Not many people know my youngest daughter was born in Tunisia. I remember there were stray cats roaming throughout the hospital when I had her. (Laughs.) Everything went well, but it’s one of those things that make you realize that healthcare in America is very good. . . . We lived through the bread riots in Tunisia (from December 29, 1983 to January 5, 1984), when the price of a loaf of bread was raised from the equivalent of a nickel a loaf to 50 cents. That may not sound like a lot, but it was devastating for the people. Cars were burning. There were riots. I was young enough to think it was a fascinating experience to live through. . . . I think I’m less fearful than most.

What do you attribute that to? I am who I am because I have very strong faith. I’m LDS (The Church of Jesus Christ of Latter-Day Saints). I teach (bible study) and share at the church. When I’m out of town on Sundays, I look for an LDS church. We’re pretty much everywhere.

If your house was on fire, what one thing would you grab, not counting people and pets? I recently framed three paintings—one by my grandfather and two by my grandmother. I wouldn’t want to lose those. They were something they chose to leave behind, so they’re important to me.

Any regrets? I don’t believe in having regrets. I look forward, not backward.