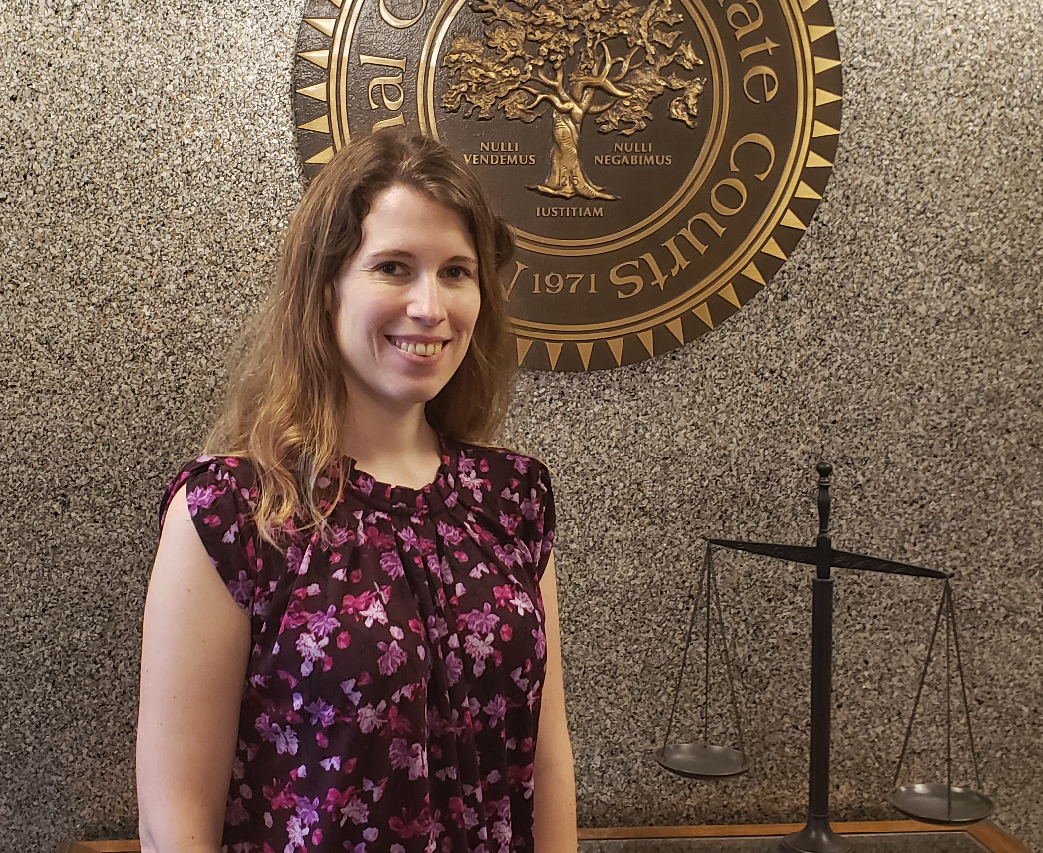 Born in Germany to parents who had an interest in learning and understanding the world, it wasn’t a shock that Miriam would take a gap year after high school and leave Germany. She attended a Christian ministry school in Fort Mill, S.C., just south of Charlotte, where she met her future husband, before returning to Germany to study political science and government. Afterward, she and her husband returned to the United States, where she earned a masters degree in political science from the University of Nebraska. A program specialist in the Research Division, Miriam supports Diane Robinson, a senior court research associate who works on data governance issues and projects that helps courts protect vulnerable people.

Read more to find out why Miriam sometimes wants to hide in a closet.

What was the biggest difference between Germany and South Carolina? There was a lot of easy small talk in South Carolina. In Germany, people take longer to open up, but when they do, they’re very honest with you.

Did you ever have problems understanding English when you were in the United States the first time? Not in South Carolina, but I was part of a disaster relief trip in Mississippi after Hurricane Katrina (in the fall of 2005). That was my first time in the Deep South, and I didn’t understand anyone. I just nodded and smiled a lot.

How did your gap year in South Carolina turn into two years? I wasn’t quite ready to face the future. There’s a phrase in German that translates to the seriousness of life. I think I was trying to put that off.

You returned to Germany for college, but you’ve been back here for several years. Do you miss Germany? I do, and especially now I feel cut off. But there’s technology. I skype with my sisters and parents a lot, and that’s been nice.

What’s something about you that surprises people the most when they hear about it for the first time? That I have five kids, (ages 10, eight, six, four and one). Depending on where you live, that’s considered a lot. Some people who find out will say, “Wow, your hands must be full.” They are the best things in our lives, but the house is always loud, we don’t have free time anymore, and it’s never boring. I hide in the closet sometimes. (Laughs).

I thought your answer to that question might be that you’re from Germany. You practically have no accent. That would have been my second answer. Most people hear something, but they can’t identify it.

What do they guess? I live in Richmond, and an elderly gentleman recently came up to me and said, “Pardon me for asking, but are you from Northern Virginia?” (Laughs.)

What’s something interesting about you that few people know? I was born in Germany, but I’m a dual citizen. My mom is German, my dad is American. I have a U.S. passport and can vote in both countries.

Have you ever met anyone famous? I don’t know about famous, but I met a lot of interesting people at my last job. I organized events for the Richmond World Affairs Council. I was the point of contact for the speakers we brought in, including ambassadors and former ambassadors. One became very well known a few months after I met him -- Bill Taylor, the U.S. ambassador to Ukraine. (Taylor, whose testimony helped build the case for impeaching President Donald Trump, resigned in January.) It was interesting following the news about him. …I was surprised how friendly and down to earth so many of those people were.

Who do you admire the most, and why? I have to say my husband. He has this drive to constantly grow personally and change to become a better person. We met in South Carolina, and he followed me to Germany. And now he’s a stay-at-home dad. That’s obviously a very big job.