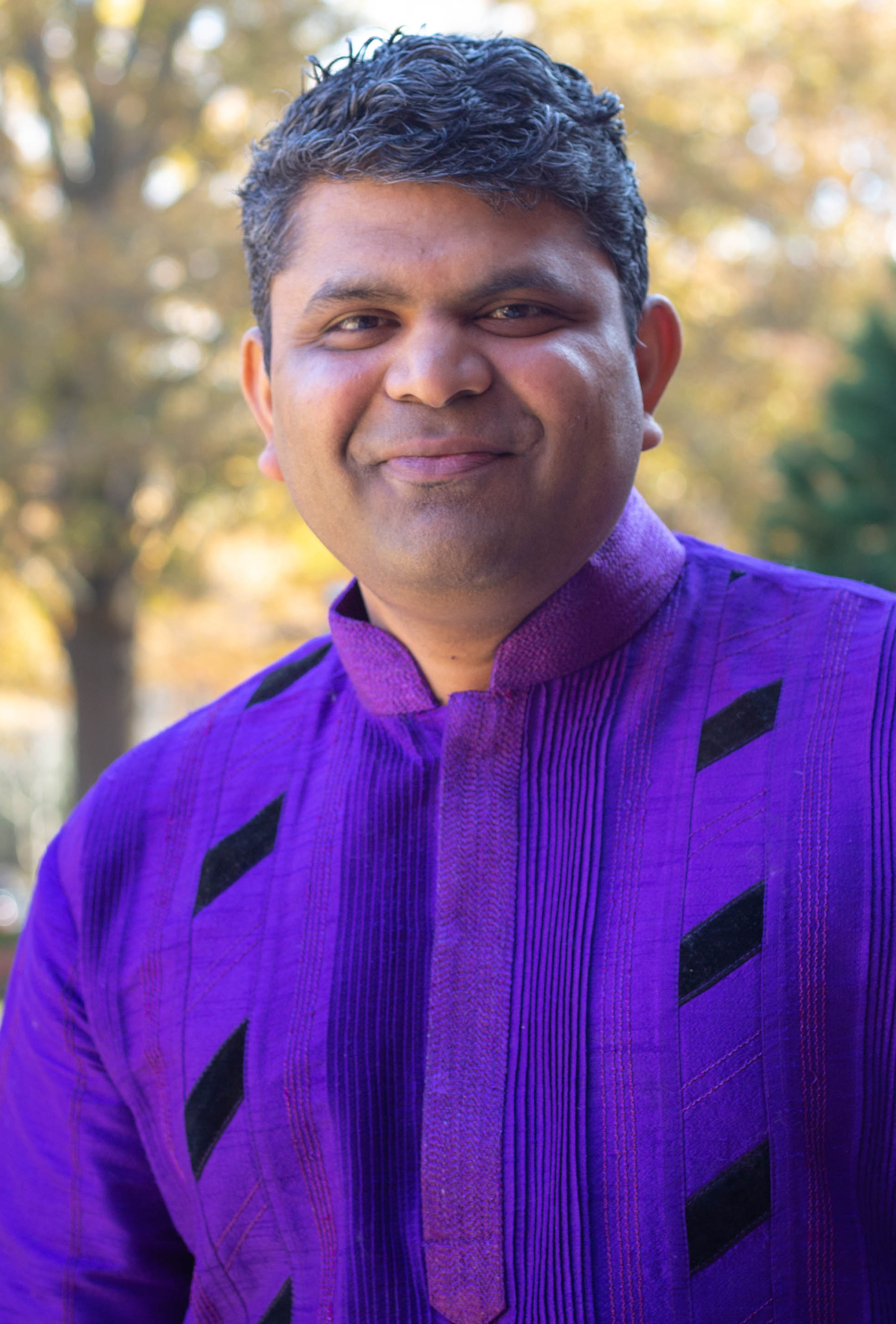 Ravi Dwibhashyam is from India, a country a third the size of the United States but with four times more people. “In India you may have a bus meant for 40 people, but there are 80 people on it. There is no concept of personal space there.” Which helps explain why when he first saw images of New Zealand, he knew he wanted to live there. But first he had to learn English. To find out how he did that and how he ended up in the United States, read on.

How do you pronounce your last name? dwee BHASH yum. …My wife doesn’t even pronounce my first name correctly. It’s rah VEE, not RAH vee. A lot of people ask if they can just call me by my first name. That doesn’t bother me.

Where were you born? In a town called Rajahmundry, in southern India. The British bastardized the name. It used to be Rajamahendravaram.

What’s your native language? Telugu. There are many, many languages in India. It’s a country of 1.2 billion people, but a lot of people can’t speak to each other (because there are 22 main languages with more than 720 dialects). I speak four languages: Telugu, Hindi, Urdu and English. And I’m learning French. …Of the four I can speak now, I take pride in my English.

How did you learn it? I was watching a World Cup cricket match between India and New Zealand, and they showed footage of New Zealand, and I absolutely fell in love with it and decided I wanted to go. …At some point, I sent an email to the immigration department in New Zealand and wrote in my bad English at the time, “What do I need to do to live in New Zealand?” And they said you should get a student visa, but you need to prove your proficiency in English. So I started watching a lot of movies in English, and I became a voracious reader. First, I started reading cricket books, then science, astronomy, politics, anything I could get in English. I needed to get a 6.5 on the proficiency test. I got an 8. I moved to New Zealand two days after I turned 30 (in 2010).

How and when did you end up in the United States? New Zealand has a seven-and-a-half-hour time difference from India, so when I wanted to call my parents, I had to coordinate that, and there are a lot of power outages in India, so when I called, sometimes I had to kill time to wait to talk with them. One of those times I was killing time in a chat room called Books and Literature, and I was chatting with a lady. A couple of days before, I had done a bungee jump, and I got a video of it, and I asked this lady if she wanted to see the video. She said yes, and I remember she said, “You’re screaming like a slaughtered pig.” (Laughs.) After the chat, I forgot about her. I was very busy with school. Six months later, she emailed me, and wrote, “Do you remember me? You showed me your video,” and we started communicating again. Several months later, I said, “Is it OK if I fly to the U.S. and see you?” So I spent a couple of weeks here. She worked as a nurse at Eastern State (Hospital) and lived in York County. …I moved here in 2013, and we got married. Even though I did it, I caution people about meeting people online. It’s a leap of faith.

Why did you become an accountant? It was the last thing I wanted to do. I wanted to be a cricketer. I can’t begin to describe how big cricket is in India. You spend half your life playing, watching and reading about cricket. The whole country wants to be a cricketer, so it’s very hard to become one. Accounting has always been something I thought I could be good at. I like the idea of balancing the balance sheet.

When you tell people that you’re an accountant, do they ever ask you about your job? No. I don’t think anyone has ever asked me about it. (Laughs.)

You dressed up as Batman on Halloween. You must be a big fan. I never really heard of Batman until I moved to the United States. I became a Batman fan after I watched The Dark Knight. I really can’t tell you how many times I’ve watched it. …I like Batman because he’s actually a human being. He actually has no super powers, but the other super heroes respect him. It’s interesting that he holds his own with them. Superman is my all-time favorite super hero. He’s courteous. He’s nice. And he’s the strongest of all the super heroes.

Which person do you admire most, and why? Mahatma Gandhi. I have mad respect for this man. He is the father of our nation. He was the inspiration for Martin Luther King Jr. and Nelson Mandela. …India is a country with such mind-numbing diversity. For the country to abide by one man’s words was remarkable. He was a man who, they say, walked the walk. In the last half of his life, he never wore a shirt. He said he wouldn’t wear a shirt until every person in India could afford to buy a shirt.

What’s something interesting about you that few people know? I’ve had a love affair with tigers that began when I was very young. The tiger is the most majestic, most regal, most beautiful and most powerful animal in the world. …I was honored and privileged to have seen a tiger in the wild. I was on a bus in a wildlife reserve, and a tiger came onto the road and sat there, surveying his kingdom, allowing our bus to be there. He sat there about 20 minutes. I’ll never forget that.