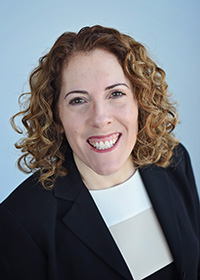 "I had my years of being able to say whatever I wanted. As a professional, I’ve learned to bite my tongue. I’ve learned that if you’re quiet and say less, you can get your point across better."

Sara Ward-Cassady primarily works on domestic violence issues for NCSC. Right now, she’s working on projects to help the courts understand how technology can be used to protect domestic violence victims and how to make sure victims receive proper access to language interpreters. Her interest in domestic violence started in 2001, when she worked as a lawyer in the Marathon County (Wisconsin) District Attorney’s Office, and it continued as an employee of the Wisconsin Court System, most recently as its deputy director. She spends her free time with her husband, Colin, and 9-year-old daughter Erin, and she serves on the board of the community theater where she lives just outside Madison, Wisconsin.

I googled you and read that when you were 11, you won a writing contest. Tell me about that. I wrote a story about my grandfather and the things we did together. There were other winners, and they created a printed book with the winning entries. That was probably a bigger deal in 1983 than it would be today with so many books being published and self-published.

Did that early success make you want to become a journalist? It made me want to become a writer. I wanted to be part of the Writers Workshop at the University of Iowa, an amazing creative writers program. But the reality is the University of Iowa was out of state, so I went to the University of Wisconsin-Madison and got into journalism. I was the arts editor at The Daily Cardinal, the student newspaper. I wanted to be an arts writer at a big newspaper somewhere. At 21, I thought I had it all figured out, so I only applied to five big newspapers. I had no business applying to any of them, and I didn’t talk to a career counselor. I should have applied to at least 20 (smaller) newspapers. So I didn’t get a job. I panicked and told my mother I was going to law school, and she said, “I never once – not once – heard you say you ever wanted to be a lawyer.” And that was true, but I went to law school (at Marquette University), and I guess it all worked out well. …In an alternative universe, I would have been a journalist.

All prosecutors seem to have interesting stories to tell. What’s your most interesting story? This might be more humorous than interesting. I had been in the D.A.’s office two weeks, and I walked into the office, and my supervisor said, "I want you to do a trial today." I said, "What?" He said, "Don’t worry. It’s just a DNR (Department of Natural Resources) citation case." Someone was using a tip-up (an ice fishing device that suspends bait) out of season, and the guy wouldn’t pay the fine, so it was going to trial. I had never tried a case before. That morning I had to write an opening statement and interview my witness, a DNR warden. I had no idea what I was doing, but it should have been an easy case. The guy admitted he did it. The warden saw him do it, and he was a good witness in court. I remember thinking, "This is ridiculous. I can’t believe I’m winning this trial." A six-person jury heard the case, and they said he was not guilty. I couldn’t believe it. I went back to the office and told my supervisor that we lost the case, and he said, "We always lose DNR trials. Everyone in northern Wisconsin hates the DNR. They’re the nature police." It was almost like I was being hazed.

You also worked as an investigator for the Office of Lawyer Regulation in Madison, Wisc. What was that like? The bulk of the cases involved lawyers who didn’t communicate with their clients. …The thing about working at OLR is if you walked into a room full of lawyers and said you worked there, it was like saying you worked for the IRS. It was a communication stopper.

What’s something about you that surprises people when they hear about it for the first time? I was a dog trainer, and I competed in dog agility competitions. It started in 2000, and I was doing it until 2011.

How did you get into that? Were you a dog lover? Actually, no. I was bitten really badly by a dog in my freshman year of high school, and I got 60 stitches. Years later, I was living in Wausau (Wisconsin), and there wasn’t much to do there, so I got a dog, and someone said, "You should take this class."

What’s something interesting about you that few people know? I was on Listen to Your Mother, (a national live storytelling performance where people read their stories about motherhood), and I talked about having to be in the crib with my daughter to get her to go to sleep. (Sara’s story was called "Confessions of a Cribaholic.")

You’re involved with community theater where you live, and you were in Brighton Beach Memoirs. How was your Brooklyn accent? The director specifically asked us not to do that. He thought it might sound cliché. We used our Wisconsin/Midwestern accents.

Who do you admire the most, and why? As cliché as it sounds, my mom. She taught me to be true to myself and to work hard, but mostly to be true to myself. I had an interesting personality. I put myself out there. I was vocal. Which was challenging to some people.

It sounds like you sometimes got in trouble for speaking your mind? Sure. I had my years of being able to say whatever I wanted.  As a professional, I’ve learned to bite my tongue. I’ve learned that if you’re quiet and say less, you can get your point across better.