The signature activity of courts in the popular imagination isn’t the conference or the announcement of decisions, and certainly not the often solitary work of research and opinion drafting. As central as those activities are to what courts do, trials, hearings and arguments are what most people will picture as the work of the judiciary.

Moreover, oral arguments provide the public and media with access to the judicial decision making process, in contrast to the announcement of a decision to review or final judgment, which issues from the court as a fait accompli. Timely access to oral arguments for contemporary cases can serve as a way for a state court of last resort to open up what can sometimes appear to be a secretive, remote institution.

Responding to widespread interest in its proceedings, the U.S. Supreme Court has made transcripts of its oral arguments available the same day they take place since the beginning of its 2010 October term.

Many state supreme courts go much further than the nation’s high court in providing timely access to oral argument in technologically advanced formats. Some, like Massachusetts, partner with law schools or other institutions to provide live and archived video or audio of oral arguments in the high court.

The Massachusetts Supreme Court links to a website maintained by Suffolk University Law School which simulcasts oral arguments and provides an archive of past arguments back to 2005:

The archives can be sorted by case name or docket number. 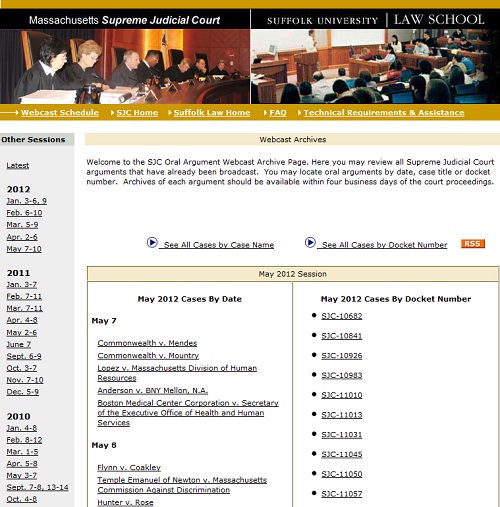 The partnership with Suffolk University Law School came as a result of a Request for Proposals sent to all Massachusetts law schools to determine interest in working with the Supreme Judicial Court to develop a webcast system for the Court’s oral arguments. Suffolk was the only school that submitted a proposal.

“The reaction to the webcast system has been very positive. We have received enthusiastic feedback from lawyers, law students, professors, teachers, the media, and the general public. ... The partnership has been very productive as the university is accommodating, flexible, and committed to the project. We have learned that it is important to have strong communication between the partners and to have a flexible arrangement to accommodate needs and issues that may arise.” 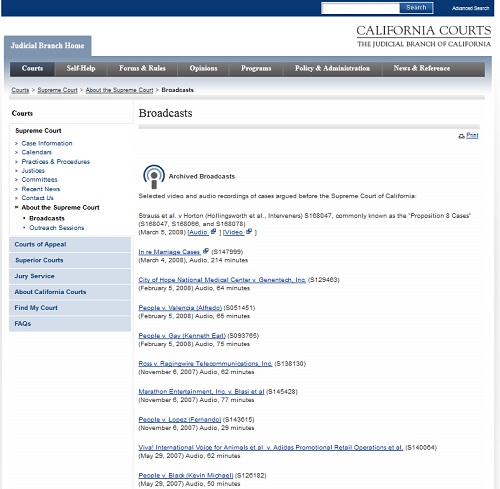 The California courts also uses a YouTube channel to host video of oral arguments and meetings, as well as speeches by court officials and other informative content: 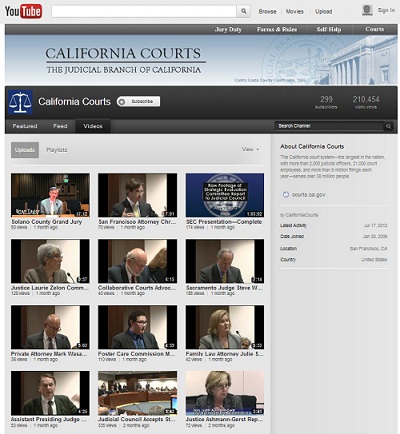 Other state courts provide similar services hosted in-house. New Hampshire devotes a page to live video webcasts of oral argument and an archive of past arguments: 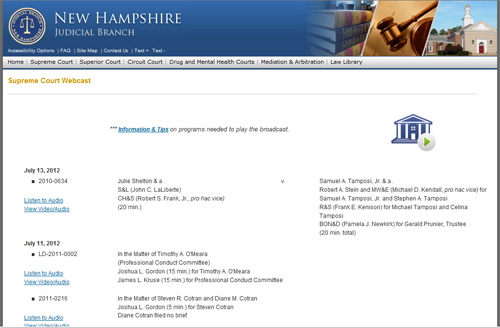 The state supreme court of Ohio broadcasts oral arguments and other live public events, such as the chief justice’s state of the judiciary addresses, thanks to their partnership with the Ohio Channel, which is affiliated with the state’s public broadcasting system.

The Ohio Channel handles all of the audio/visual needs for broadcasting the events on television and publishing and archiving all of the media online. Their presentation is visually striking: 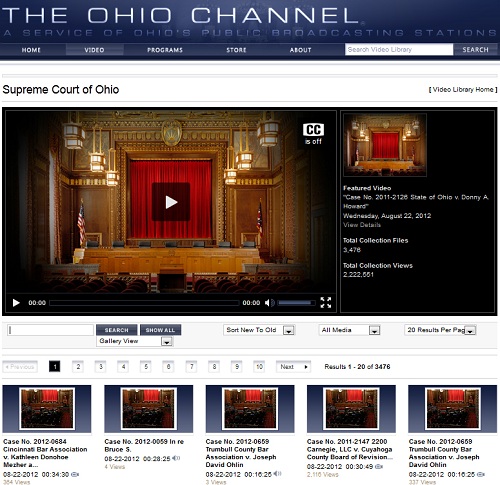 Media files can be downloaded, and audio or video of supreme court proceedings is also available via iTunes and on DVD, VHS or CD from the Ohio Channel. Each video is also accompanied by links to general case information, filings and a preview of each case.

The Ohio Supreme Court began broadcasting proceedings in 2004 following the renovation of their building. The renovation allowed the court to add the lighting and robotic cameras needed for recording oral arguments.

“We embarked upon this effort because we wanted to make the Supreme Court’s proceedings as accessible and transparent as possible.”

- Chris Davey, director of public information for the Supreme Court of Ohio

Each case gets several hundred views online in addition to the viewership of the live broadcast online and on television.

The contract with the Ohio Channel provides two full-time staff members to handle all of the audio/visual needs for the proceedings and other court needs, such as education CLE videos and 1-2 minute news packages. The contract staff members, who work inside the public information office, also handle the postings and maintain the online video archive. Their current contract with the Ohio Channel is for $250,000 a year, but it also covers all A/V needs for the court – not just oral arguments.

The Florida Supreme Court also works with the state’s public television broadcast network, the Florida Channel, to provide live streaming video of oral arguments. The Florida Channel also manages a dedicated site that provides an archive of videos dating back to their first broadcast in 1997.

In addition to the oral argument video, Florida’s court posts transcripts of oral arguments linked underneath the video file for the case: 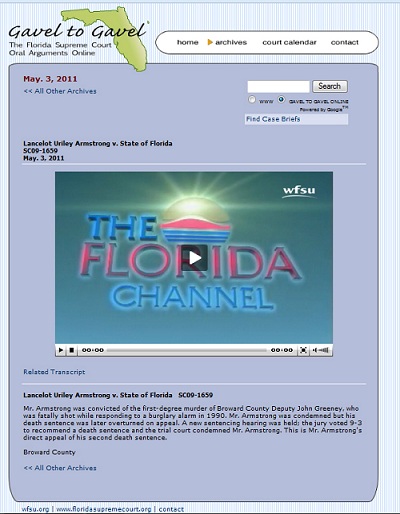 The transcripts are searchable so if you’re looking for a case, but don’t know the name of it or when it was heard, you can find it by keyword.

The Florida Supreme Court has an annual contract of $141,750 with the Florida Channel to handle the entire process – filming, posting the videos and managing the online archive.