In a courthouse with multiple courtrooms, at least one courtroom that is larger than the others usually is required for calendar calls, docket calls, arraignments, ceremonies, public meetings, or large multi-defendant trials.

High-volume initial appearance courts should be located close to the courthouse's main public entrance. These courtrooms usually have associated with them offices and work spaces for pretrial services staff, court clerks, and prosecutor and public defender staff so that detention decisions can be made quickly.

Smaller hearing rooms are suitable for arbitration and mediation, and settlement conferences. As the use of arbitration and mediation increases, many more court facilities will need to include such spaces. A major consideration in determining courtroom size is flexibility. It is often advantageous to include jury trial capabilities in all courtrooms in case the practice and procedures of non-jury courts change in the future. Additionally, while courts may be separated into civil and criminal, it may be advantageous to provide secure prisoner access to all courtrooms even courtrooms that may be used primarily for civil cases. This will permit greater flexibility in the scheduling of cases and there are occasions when in-custody individual appear in court in civil matters.

The traditional courtroom is rectangular and deeper than it is wide, although modern courtrooms also include round and square shapes. The shape of the courtroom must account for the need for all participants to have clear lines of sight, including the distances between the participants and the angle that they have to turn to view others. Distance can affect acoustics and the ability to observe changes in facial expression or demeanor. Wide sight angles interfere with concentration and cause physical fatigue as participants must look back and forth. The litigation area of the courtroom should be designed to allow all participants involved in the proceedings to see and hear each other clearly.

Functionally, courtrooms are divided into two zones: the litigation (well) area and the public (spectator) areas. These areas are generally separated by a bar or low railing.

The litigation area is typically rectangular with the bench located along the front wall. Many newer courtrooms, however, are designed with a corner bench which allows the judge a better view of the courtroom and does not require as much space. Circular courtrooms once popular during the 1970s and sometimes are considered appropriate for hearings where the adversarial nature of the proceeding needs to be de-emphasized, such as in custody and support cases. They tend, however, to diminish the formal nature of the proceedings and the judicial image.

The height of the courtroom should be proportional to the room's size for symbolic and environmental reasons, and it should provide appropriate distance from the ceiling for a judge standing at the bench. The head of a six-foot judge standing on a raised dais of approximately 21 to 24 inches would be eight feet above floor level. Ceiling heights of 11 feet or less would make the judge appear too close to the ceiling, but excessively high ceilings can create acoustical problems.

Symbolism and functionality are both important in courtroom design. The formal arrangement of the participants and furniture reflects society's view of the appropriate relationships between the defendant and judicial authority, or in a civil case, of the relationship between the parties. In evaluating any courtroom layout, the communication of social and judicial values should be given equal weight to the design’s functionality.

The appearance and ambiance of the courtroom should be restrained and dignified. Finishes should express the solemnity of the proceedings, yet not be too dark and overbearing. A mixture of light and dark woods, along with acoustic fabric in the rear of the courtroom, has been found appropriate in many instances.

In general, it is best if courtrooms accommodate generalized types of litigation rather than specialized types of proceedings, especially in smaller courthouses. Providing courtrooms with jury capabilities and prisoner security arrangements increases their flexibility in meeting courtroom requirements based on scheduling, as well as future courtroom requirements based on unanticipated growth or changes in operational practices.

Courtroom participants should be able to hear the proceedings clearly. Courtroom acoustics present a challenge because of the need to amplify and diffuse sound throughout the room, limit the reverberation of sound, and control external noise. Acceptable acoustics can be obtained only through the proper floor plan and the appropriate balance of materials to reflect, absorb, or diffuse sound. Electronic amplification is not typically necessary in a courtroom well-designed for reflection and diffusion of sound.

Designing a lighting system for a courtroom is a mixture of art and science. Adequate lighting must be provided for the task performed, be sensitive to the occupants of the room, not be an economic burden to operate and service, and afford the dignity required in the space. Appropriate contrast is necessary, but should not create glare. Both direct and indirect lighting are commonly used in courtrooms. Where possible, natural lighting is desirable for psychological and aesthetic reasons.

Courtroom lighting has traditionally been designed to provide general illumination (30 FC) throughout the room and higher illumination levels (70 FC) in the litigation well. With the use of video display monitors at the judge’s bench, clerk’s workstation, and attorney tables, workstations should be provided specific lighting and individual lighting controls to allow participants to view display monitors clearly.

Where video monitors are in use, illumination levels should be generally lower to ensure user comfort; display screens should be capable of being tilted and rotated; the top of the screen should be lower than the eyes of the user; and illumination levels ranging from 20-50 foot candles should be provided on horizontal work surfaces. A moderate level of general illumination combined with high performance task lighting should be used throughout the building.

The courtroom should be a comfortable temperature. A courtroom that is too warm or too cool can have adverse effects upon the participants.

All areas of the victim-witness spaces should be accessible to persons with disabilities.

All courtrooms should be accessible to persons with disabilities.

Security is provided through the use of architectural barriers, technology, and operational methods. Architecturally, security is provided through the clear separation of circulation routes for participants in the proceedings and the elimination of spaces where a weapon or bomb might be placed. The public should enter the courtroom from the public zone, prisoners should enter through a secure zone, and judges and court staff should enter through a restricted, or private, zone.

The courtroom can be made more secure through the use of metal detectors at the building's main entrance, bullet-absorptive materials along the judge's bench, duress alarms connected to the building's central security control room, and the use of video surveillance cameras in the courtroom.

Operationally, bailiffs or court deputies should be stationed in the courtroom during all court proceedings, and an emergency response plan should be developed by facility users in the event that a situation arises.

Generally, the colors and tones of walls and ceilings should promote a dignified, calm atmosphere in the courtroom. Furniture and finishes should be comfortable, sturdy, durable, vandal-resistant, and easy to clean. Consideration should be given to the life-cycle cost of materials as well as the aesthetics. Draperies or other window coverings should be used if the courtroom has windows.

Floors and walls should be treated for sound control. Seats, benches, and chairs should be comfortable and easy to maintain. Space should be provided to display flags and state seals.

For more specific information about individual courtroom elements, see any of the following: 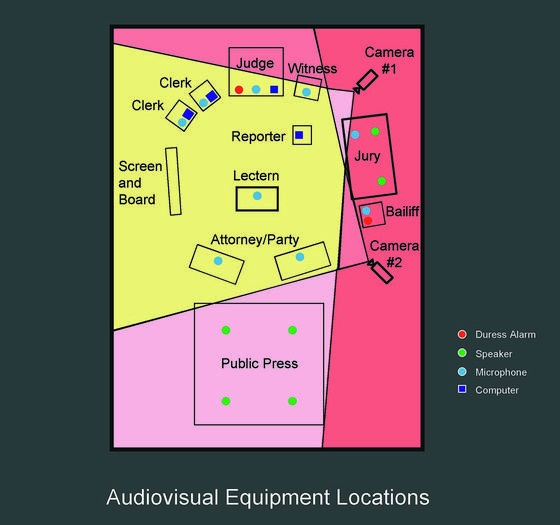 In most courtrooms, judges and court staff should have access to audiovisual/video equipment, computer terminals or personal computers, and automated case management systems. Technology closets should be positioned adjacent to the courtrooms for audio/visual racks and other computer technology.

Sound and video equipment. While most courts‑of-record will probably continue to use court reporters for taking the record, electronic audio and video recording and playback equipment should be available in every courtroom to present evidence and record the proceedings. Microphones should be controlled by the judge or clerk and located at the bench, witness stand, podium, attorney tables, and interpreter's stand.

Sound amplification systems. All courtrooms greater than 800 square feet should be equipped with sound amplification equipment for the hearing impaired. The equipment also permits the playback of audio exhibits. Master controls should be located at the bench or court clerk's station. Access to computer terminals and video display monitors should be planned for the bench, court clerk's station, court reporter's station, attorney tables, witness stand, and jury box.