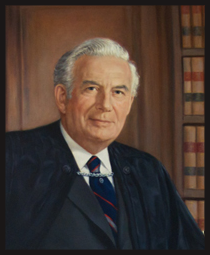 Society membership is commemorated by the presentation of a limited-edition print of the final portrait of the late Chief Justice Warren E. Burger, who helped found the National Center for State Courts in 1971. Each print is signed and numbered by artist Fran Di Giacomo. The portraits are a gift from Texas attorney Charles M. Noteboom, Esq., who commissioned the original portrait, which hangs in the National Center for State Courts’ headquarters in Williamsburg, Virginia.