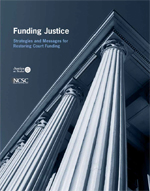 Early in 2012, NCSC joined forces with Justice at Stake to examine what strategies and messages could help courts make a stronger case for court funding.

Together we commissioned a nationwide opinion research project to understand how to better tell the story of the courts—to the public, the media, and the legislators who shape budgets. The project included research, focus groups, a nationwide poll of American voters, and one-on-one interviews with Chief Justices, legislators, and others who have been closely involved in the debates around court funding in the states.

The resulting guide — Funding Justice: Strategies and Messages for Restoring Court Funding — builds on more than a year of work. It contains important lessons, some of them counter-intuitive, about how people view the courts and their funding needs. It explains how to tell the story of the courts, and why they matter, in an era when the public is very focused on government austerity. It includes a section on working with budget policymakers, based on interviews conducted around the country.

The recommendations that underlie Sections 1 and 2 of this guide are based on findings from focus groups and a national public opinion survey. Six focus groups were held in Richmond, Virginia; Milwaukee, Wisconsin; and Phoenix, Arizona, between February 13-23, 2012. The public opinion survey of 1,000 registered voters was conducted between April 2-5, 2012. Recommendations within Section 3 are based on extensive telephone interviews between representatives of GBA Strategies and budget policymakers in the states of Kentucky, Oregon and Utah. Those interviews included state Chief Justices, state court administrators, legislators, legislative staff, and others with an intimate knowledge of the court budgeting process.

For information on ordering print copies of the guide, please contact Cheryl Wright.  For more detailed information on the research or methodology, contact Jesse Rutledge.

Courts face special challenges seeking funding. Most voters blame backlogs on excessive lawsuits and legal maneuvering, not funding cuts. They appreciate the unique role of courts, but give higher priority to other government services. Voters are unaware of the effects of court budget cuts on ordinary people.

A two-tiered strategy is needed.Court leaders must make their best case to budget policymakers now, while commencing a long-term campaign to build public education and support. Most Americans are simply not motivated by short-term appeals for court funding.

Stick to a core message. Do not rely on the courts’ status as a co-equal branch. Embrace demands for austerity, and show how courts will be effective stewards of taxpayer dollars. Use detailed narratives to show the impact of cuts on people and the economy, not on institutional needs. Remind audiences of the courts’ core mission of delivering fair and timely justice.

Use the right messengers. On court funding issues, the public is most persuaded by retired judges and small-business owners. Legislators want to hear from Supreme Court justices, fellow lawmakers who are attorneys, and constituents (especially judges, attorneys, business leaders, and court users).

Engage the public. Americans need to know more about how courts work, and how underfunding of courts harms taxpayers and the economy. Acknowledge problems, and use specifics to show how investments will generate efficiency and savings. Close by showing how budget cuts threaten access to justice and fundamental protections promised by the justice system.

Target budget policymakers wisely. Build relationships by engaging policymakers year-round, not just at budget time. Be a full partner in the budget process, and win trust through transparent, detailed budgets with strong business data and metrics. Find ways to save taxpayer money, and report back on progress. Educate legislators and staff about the courts, explain the impact of cuts in concrete terms, and remind legislators of the judiciary’s core mission. Build broad coalitions with non-traditional partners.