Research to Use Innovative Data Science Tools to Study Pretrial Detention in More than 1,000 U.S. Counties

Big Tech Condemns Algorithmic Tools for Determining Who Gets ‘Bail’

UK enforces 24/7 surveillance using GPS tag for offenders. A wide range of offenders will be eligible for the new tags, including those subject to court-imposed bail, community orders and suspended sentence orders, as well as those on Home Detention Curfew and indeterminate sentenced prisoners released by the Parole Board. Location monitoring can be used to: Enforce an exclusion zone; keep a given distance from a point or address; monitor an offender’s attendance at a certain activity; and monitor an offender’s movements to support discussions with probation about an offender’s lifestyle and behaviors.

HM Courts & Tribunals Service Reform Update Summer 2019. Single Justice Service HMCTS’s Single Justice Service (SJS) enables magistrates’ courts to deal with low-level crimes, where the defendant has plead guilty or failed to respond, quickly and efficiently.  A new digital case management system, called the Automated Track Case Management (ATCM) system, supports the program, saving court staff the time of printing, preparing, and transporting physical files. Defendants are able to make a plea on-line resulting in pleas as quickly as four days versus the average of 29 days under the postal method. Since the introduction of on-line pleas for these cases there has been an increase in the number of people responding versus when the system was paper-only--up from 16% to around 20% now.

Cleveland's In the Neighborhood program allows people to appear in court without fear of being put in jail. At the court they can get a payment plan or a new court date for old traffic or misdemeanor warrants in Cleveland and several suburbs.

Digital Jail: How Electronic Monitoring Drives Defendants Into Debt. Ankle bracelets are promoted as a humane alternative to jail. But private companies charge defendants hundreds of dollars a month to wear the surveillance devices. If people can’t pay, they may end up behind bars. 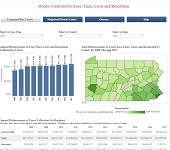 Michigan One Court of Justice Website. Online Resolution of Certain Tickets and Violations