Juror compensation in the United States

All states compensate citizens called to serve on civil and criminal juries. However, jurors’ daily compensation is usually far below the federal or state minimum wage. Providing adequate compensation demonstrates the value of the jury and can increase faith in the judiciary. A clear, consistent statutory scheme subject to regular legislative review would ensure that juror compensation keeps pace with financial realities. 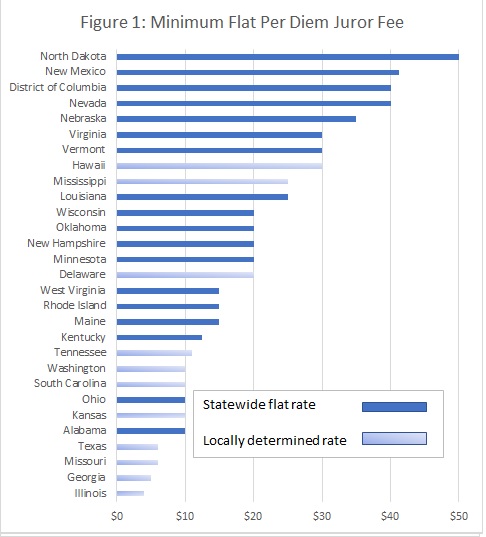 Twenty-eight states plus the District of Columbia, use a flat rate per diem fee (see Figure 1). Flat rates range from $4.00 to $50.00 per day. The average rate across the 29 states plus DC is $20.20. Eleven states establish a minimum daily rate but allow local courts or legislative bodies to set a higher per diem rate.

Twenty-three states use a graduated fee system, which pays jurors a reduced flat-rate fee on the first day of service and an increased fee after being sworn as a trial juror or after a predetermined number of days of service. First-day rates range from $0.00 to $40.00, while graduated rates range from $12.00 to $50.00 (see Figure 2). The average graduated rate across the 23 states is $38.27. Note:  Louisiana uses both so is included in each. 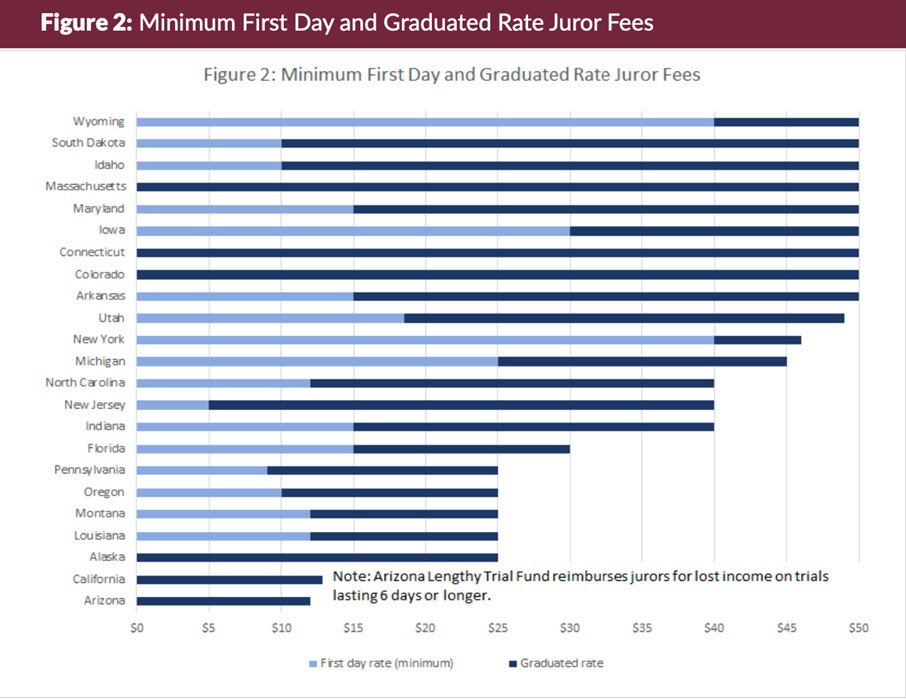 Graduated rates come in two forms. The first splits the compensation obligation with the employer. The second offers direct compensation by the state from the beginning and an increase over periods of time for service.

Thirty-one states provide additional compensation to jurors for travel expenses, especially for jurors who drive long distances to the courthouse, as in Idaho. Alaska and Hawaii include travel by boat, airplane, or other forms of transportation.

Juror compensation has traditionally been reimbursement for out-of-pocket expenses and token recognition of the value of jury service, but not reimbursement for lost income. On average, state juror fees are only 20% of daily per capita income. Twenty states have raised juror fees since 2010; 14 states have not raised fees since 2000 when the cost of living was 39% less than today; and four states have not done so since the 1970s.

States have begun to recognize the relationship between the amount of juror fees, the proportion of jurors excused for financial hardship, and the jury pool’s demographics. Legislation to adjust juror compensation is pending in Arizona, California, Louisiana, Missouri, New Jersey, New Mexico, Oklahoma, Pennsylvania, Virginia, Vermont, and West Virginia.

Missouri has three pending bills that permit county commissions to bar compensation for the first two days of service on grand and petit juries; provide an across-the-board increase from $6.00 to $25.00 with an employer-payment requirement; and permit some variance by county. Other states have proposed significant increases in compensation, including Oklahoma ($20.00 to $75.00) and Pennsylvania ($9.00 to $40.00). A Louisiana bill would increase rates from $25.00 to $50.00 for civil jurors.

New Jersey and New Mexico have proposed legislation to tie the juror compensation rate to the state minimum wage. Vermont might switch from a $30.00 flat fee to a $15.00 hourly fee. Arizona is considering making petit jurors eligible for reimbursement of lost income after one day of service. A pilot program in California could provide $100.00 per day to low-income jurors in criminal cases.