Answering the call for jury duty 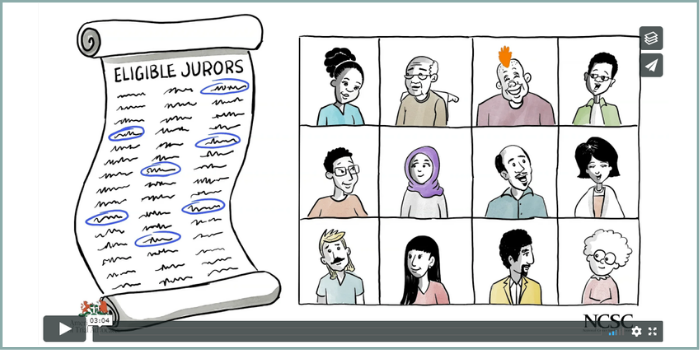 Answering the call for jury duty

Jury trials are considered the backbone of our justice system, yet many people are unprepared when called for duty. Often, it’s because they don’t know what to expect – or what is expected of them.

To help educate the public about jury service, the National Center for State Courts (NCSC) and the American Board of Trial Advocates (ABOTA) developed an “explainer” video titled, “Answering the call for jury duty.”

The three-minute video explains who’s eligible, what to do when summoned, and what happens when you’re selected to serve. The video is available free for courts, schools, civic groups and others to download and show and/or post on their websites.

“Jury service is one of the greatest privileges and responsibilities of American citizens.  We hope that by providing this informative and inspiring video for use by courts and civic organizations, we will encourage greater participation by those who are called to serve,” said Indiana attorney Deborah Daniels, an NCSC Board of Directors member who helped develop the video.

The need for jurors is great: Each year there are more than 150,000 jury trials in state courts across the country. Courts have taken great efforts to make jury service manageable for all who serve. For example, two thirds of Americans live in communities that now have a one-day or one-trial system.

In addition to answering questions about jury service, the video serves as an inspiration to remind the public that jury service is a unique privilege of being a U.S. citizen. NCSC and ABOTA encourage courts, schools, and civic organizations to post a link to the video on their websites and to share it on social media.

Share the video now on Facebook—you will find it pinned to the top of NCSC’s Facebook page.

Earlier this week, Kansas Court of Appeals Judge Steve Leben introduced a new blogger for Procedural Fairness Blog, which is supported by NCSC. Judge Pierre Bergeron, of Ohio's First District Court of Appeals, will be providing regular updates throughout 2020 on legal proceedings and fairness in the courtroom. The latest blog post also lists useful audio and video Procedural Fairness resources, such as courtroom scenarios, video interviews and audio podcasts about communication on the bench, judicial training and insights. Check out and subscribe to the blog here.