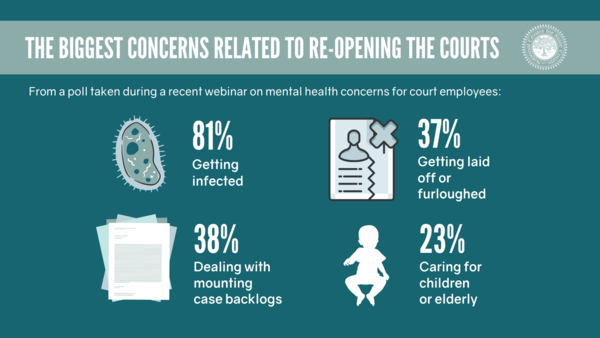 With most of the attention on re-opening the courts focusing on how to keep users safe, court officials are beginning to think more about their employees.

Are employees afraid of facing large numbers of the public? How many of them are suffering from anxiety and depression? If they are, how do we help them?

These issues and others came to light during a recent webinar in which court administrators and judges shared their concerns about the impact of re-opening the courts on those who work there.

“As administrators, we’re adept at planning for technology, scheduling and other familiar areas,” said Christopher Patterson, administrator of the Fifth Judicial District Court in Des Moines, Iowa. “We’re not familiar with checking on employees’ mental health. We say, ‘How are you?’ But do we really want to know. Frankly, no. We don’t know how to deal with it if people say, ‘Not very well.’ We don’t have the needed resources to deal with that. I would tend to gloss over that and focus on the issues of the day, like the docket.”

The webinar opened with a discussion between the co-founders of One Mind at Work, a mental health advocacy group, who referred to the second round of the coronavirus pandemic, not as a time when  Covid-19 infections re-occur, but as a time when mental health issues triggered by the pandemic will overwhelm the health care industry. They reported that since February, cases of anxiety disorders, depression and post-traumatic stress disorder have increased 91 percent, 163 percent and 73 percent, respectively.

“Openness and leadership at the top are the most important things,” One Mind co-founder Garen Staglin told the judges and court administrators. “Empathy is also important. If you typically check in on your employees once a week, start doing it once a day. Let them know it’s OK to be feeling not OK right now.”

Massachusetts Trial Court Chief Justice Paula Carey said, “All of us are preparing to bring our employees back, and one of the major questions they have is, ‘Am I going to be safe?’”

That comment sounded prescient when a few minutes later a poll question about webinar attendees’ biggest concerns revealed that 81 percent said they are worried that returning to work could lead to a COVID-19 infection. Some 38 percent said they are worried about the mounting case backlogs in their courts, and 37 percent expressed concern about getting laid off or furloughed.

More than one webinar panelist spoke of the need for exceptional leadership to address court employees’ mental health issues.

“This is an extraordinary time in our lives and in our careers,” said webinar moderator Lawrence Marks, New York’s chief administrative judge, “and we need strong leaders now more than ever before.

Have information to share about how your court is responding to the pandemic? Submit it to pandemic@ncsc.org.

Stories from inside the courts

Judge Emily Miskel from the 470th District Court in Collin County, Texas, was part of history on May 18, when she and Judge Keith Dean presided over the nation’s first-ever remote jury trial. Jurors, using cell phones, computer tablets and laptops, appeared from their home offices, living rooms and dining rooms. Judge Miskel oversaw the videoconferencing technology that allowed this remote trial to occur, moving jurors in and out of the virtual courtroom and waiting rooms, among other things. Read the full interview.