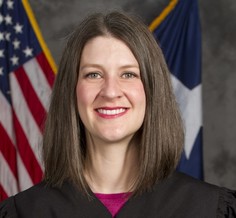 Judge Emily Miskel, who has been instrumental in moving courts to remote hearings as a result of COVID-19, is the 2020 William H. Rehnquist Award for Judicial Excellence, the highest honor NCSC bestows to a state court judge. The award was presented yesterday – appropriately during a video remote hearing. Chief Justice of the United States John G. Roberts, Jr. appeared via prerecorded remarks to congratulate Judge Miskel.

The Rehnquist Award recognizes a state court judge who possesses integrity, fairness, open-mindedness, intellectual courage and sound judgment. This year represents the 25th anniversary of the award and the first time it has not been held in the Great Hall of the U.S. Supreme Court. Chief Justice Roberts noted in his remarks that “Chief Justice Rehnquist would probably be surprised by a virtual gathering in his name.”

Judge Miskel, who has a degree in mechanical engineering and a familiarity and comfort with technology, quickly identified a platform for the Texas judiciary to conduct remote hearings when the pandemic broke out. That crucial legwork led to the first fully virtual bench trial on March 25 – and the first virtual jury trial, on May 18. During this time, she trained other judges to use the technology, and participated in numerous webinars about remote technology, some of which attracted thousands of judges and other court officials.

Chief Justice Roberts commended Judge Miskel’s “ability to lead under unprecedented circumstances,” saying she “developed pioneering solutions and helped her colleagues throughout the country rise to that challenge.”

NCSC President Mary McQueen noted that Judge Miskel was the perfect choice for the 2020 Rehnquist Award. “The National Center is honored to present the Rehnquist Award to a state court judge who met the challenge during this pandemic of using technology to make court hearings and jury trials a reality,” McQueen said.

In their award nomination letter, Slayton and Texas Chief Justice Nathan Hecht wrote, “This progress (remote hearings) would not have been possible without Judge Miskel’s skill, courage, and decisiveness. It is also unlikely that many judges across the country and around the world would feel as comfortable using remote technology to conduct court proceedings without her leadership.”

Judge Miskel’s reputation for being technologically savvy goes beyond remote hearings. She frequently speaks on legal technology topics such as electronic evidence, e-discovery, data theft, interception of communications, and online impersonation. She became a judge in 2015, when the Collin County court was created, and two years later was awarded the highest overall ranking in a poll by the Collin County Bar Association. Judge Miskel received her law degree from Harvard Law School and is board certified in family law by the Texas Board of Legal Specialization. In December, she expects to be board certified in child welfare law.

NCSC 2020: Highlights from a Busy Year

Partners and staff share how NCSC has impacted their courts and their lives this year, especially during the pandemic. 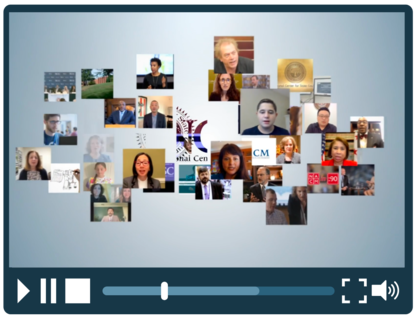