Most state court judges received pay raises since January that averaged 1.5 to 2 percent, according to NCSC’s most recent Judicial Salary Tracker.

No jurisdictions have cut pay in 2021, unlike last year, but general jurisdiction court judges in 24 states and U.S. territories did not receive a pay raise, reflecting the impact of the pandemic on government coffers.

“It’s surprising, however, that even during the pandemic, most jurisdictions managed to give their judges pay raises, and the ones that cut pay last year managed to raise pay this year,” said Dimarie Alicea-Lozada, the NCSC analyst who oversaw the compilation of the salary data. “That’s something we wouldn’t have predicted a year ago.”

Unlike salary surveys in recent years, this one includes information from all 56 state court jurisdictions, which includes the 50 states, the District of Columbia and the nation’s five territories: Puerto Rico, American Samoa, Guam, Northern Mariana Islands and the Virgin Islands. 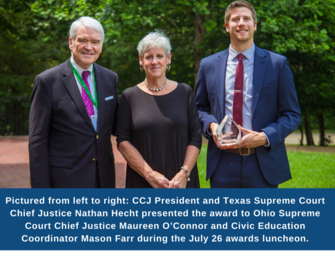 Ohio Supreme Court Chief Justice Maureen O’Connor and Civic Education Coordinator Mason Farr were on hand at the annual CCJ/COSCA Conference in Williamsburg to receive NCSC’s 2021 Sandra Day O’Connor Award for the Advancement of Civics Education. The award honors an organization, court, program, or individual who has promoted, inspired, improved, or led an innovation or accomplishment in the field of civics education related to the justice system. The Ohio program was selected for its multi-faceted approach to civics education, its longevity, its continued program expansion, and its ability to be replicated in other jurisdictions around the country.