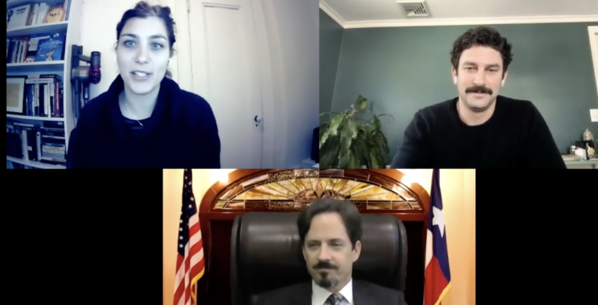 The efficiency of modern-day Internet search engines allows us to be fairly certain that a lawyer has never before told a judge, “I’m not a cat.” But that’s what Rod Ponton, the attorney for Presidio County, Texas, told Judge Roy Ferguson of the 394th Judicial District Court, which covers about 20,000 square miles – more than 16 times larger than Rhode Island – along the United States-Mexico border.

On Feb. 9, Ponton, the 69-year-old “cat lawyer,” used his assistant’s computer to attend a Zoom hearing with Judge Ferguson and two other lawyers, one of whom put on his glasses to get a clearer look at Ponton, who was somewhere behind the filter of a white kitten with expressive eyes and a mouth that moved whenever he spoke.

If you’re one of the three or four dozen people on Earth who hasn’t seen the video, go to NCSC’s Tiny Chat page to also hear an interview with Judge Ferguson (pictured above, center, along with hosts Danielle Hirsch and Zach Zarnow).

A few days before the “cat lawyer” hearing, Texas announced that its judges presided over more than one million remote hearings since the pandemic began in March. Judge Ferguson said he has seen and heard funny things during remote hearings, but he and the lawyers and litigants who appear before him take them very seriously. These hearings, he said, have made it easier for everyone in his sprawling district to participate. Litigants have attended hearings from their cars, their houses and their workplaces, and Judge Ferguson attributes higher appearance rates in his district in 2020 to these remote hearings.

As the Feb. 9 hearing began, Ponton realized the cat filter was on, but he didn’t know how to remove it, and he felt the need to tell Judge Ferguson, “I’m here live. I’m not a cat.”

“I can see that,” the judge replied.

Ponton offered “to go forward” with the filter in place, appearing as the adorable and charismatic white kitten, but Judge Ferguson didn’t get started until after he told Ponton how to remove it.

The judge, sensing that the world could use a laugh, released the video later that day, and Ponton didn’t mind.

“In Texas, we have a phrase, ‘You can’t put the toothpaste back in the tube,’” Ponton said. “If this was going to become an internet sensation, I just thought I would laugh at myself along with everyone else and roll with it.”

The vast majority of things that people say go viral never really do, but this 48-second video did.  Less than two days later, it was written about in publications ranging from The New York Times and The Washington Post to The New Zealand Herald and Laptop magazine. Ponton told a reporter for the British Broadcasting Corporation, “I disappeared and a cat appeared.” As if by magic.

On The Late Late Show with James Cordon, the host called the video “the best thing I’ve ever seen on the Internet.” He said he’s sure the video will be optioned as a TV show, and a member of the show’s band recommended it be called “Claw & Order.”

As it turns out, this is Ponton’s second 15 minutes of fame. In 2019, he appeared in a popular Netflix documentary about one of his former clients, convicted serial killer Henry Lee Lucas.

Not nearly as warm and fuzzy.

2021 holds a lot of promise, primarily brought on by the hope that the COVID-19 vaccine is going to end the pandemic. It’s also significant to us because 2021 marks our 50th anniversary. To kick off this significant milestone, we have created an NCSC “memory tree” for people to leave their favorite NCSC memory or an anniversary message. The messages will take the form of a leaf on the NCSC tree, representative of the one in the NCSC seal. Please join NCSC President Mary McQueen and all of us at NCSC in celebrating 50 years of court improvement by leaving a memory.