The killing of George Floyd by then-Minneapolis police officer Derek Chauvin has led to an effort to develop a tool that will help courts assess whether they’re treating people of color fairly.

That death, recorded by a teenager’s cell phone, reignited cries of systemic racism in the United States and worldwide. In the judiciary, it triggered statements from dozens of state supreme court justices and other judicial leaders who called for an examination of how Black and brown people are treated by the courts. The Conference of Chief Justices and the Conference of State Court Administrators followed suit, calling for system-wide assessments “needed to make equality under the law an enduring reality for all, so that justice is not only fair to all but also is recognized by all to be fair.”

Resources have been available to court leaders but not a comprehensive assessment tool that provides court leaders with guidance on where to begin, what information to collect, how to evaluate it and what actions to take next.

The tool is being developed as part of the Blueprint for Racial Justice,  a national initiative to improve racial justice outcomes in state courts.

“I anticipate that it will help courts that may be on the fence because they don’t want to make the wrong decisions with respect to inclusion and equity issues,” said Edwin Bell, NCSC’s director of Racial Justice, Equity and Inclusion. “Matters of the heart may be well intentioned but not necessarily the best way to approach complex problems, so my hope is that the tool will allow courts to take a more methodical approach to the issues that are uncovered.”

The 18-month project, funded by the State Justice Institute, started on September 1.

To create an effective tool, NCSC researchers, in consultation with Blueprint for Racial Justice members, will collect and evaluate existing assessments and resources, identify court priorities and resource gaps, and develop the tool’s content.

“We’re working to build a self-assessment and learning tool that is helpful to courts no matter where they are in the process, and that connects them with the resources they need when they need them,” said NCSC researcher Jennifer Elek, who is directing the project.

Researchers are working on resources that may be available as early as December. By the end of the project, the tool will be shared widely, including on NCSC’s website and social media and in its e-newsletters. After its release, NCSC will advise courts on how to use it, document lessons learned and monitor its use for possible refinement. 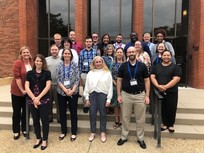 Data scientists from 16 states and territories, including Northern Mariana Islands and Puerto Rico, met at NCSC’s headquarters in Williamsburg on October 6 and 7 for the 15th Annual Data Specialists’ Roundtable.  A big topic of conversation focused on how courts can respond to the predicted forecast of a surge in eviction cases. Some of the other discussion items included pandemic data collections and trends, changes in state laws, data warehouses and national data collection efforts. The photo shows the attendees as well as a few NCSC staffers.