The Mental Health Task Force has a plan 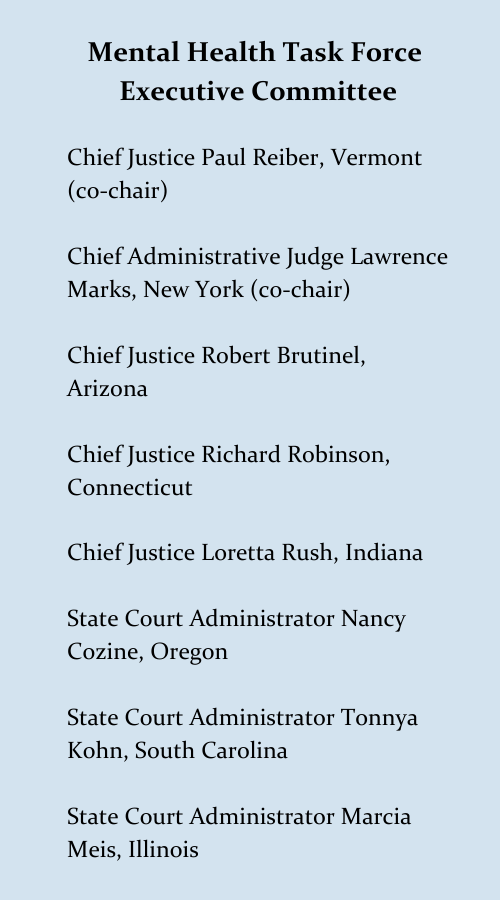 The task force, which was established in 2020, recently adopted a detailed work plan that outlines its objectives for the next two years. Its main goal is to develop resources and recommendations to improve the state courts’ response to the problem. The forty-three members of the task force are organized into three working groups: criminal justice; civil, probate and family; and education and partnerships.

Vermont Chief Justice Paul Reiber, the task force’s co-chair, said the need for the task force is obvious, and he expects its work to lead to real, positive changes.

“Our current system often struggles to understand and accommodate mental health challenges, leading to outcomes that can perpetuate the problems that bring people to court in the first place,” Chief Justice Reiber said. “…Through hard work, collaboration and a little luck, we expect great success.”

The problem of individuals with mental illness spending too long in jails while awaiting trial and in prisons where they lack appropriate treatment impacts courts nationwide.

“While our state is smaller in population, economic instability and lack of public transportation and connectivity tend to aggravate mental health challenges in the courts,” Chief Justice Reiber said. “We are like other states with small populations: The problems are the same and the resources are limited. As a result, there is a tremendous benefit to be conferred on our state through the anticipated success of this project.”

The task force, funded by the State Justice Institute, was created by the Conference of Chief Justices and the Conference of State Court Administrators. The task force is committed to working with other organizations, and next month the task force and the U.S. Department of Health and Human Services’ Substance Abuse and Mental Health Administration will co-host a series of regional meetings to build collaboration between chief justices, state court administrators, and executive branch behavioral health  leaders in every state and secure resources for future work.

Go here to read more about the task force’s work and here to see the Behavioral Health Resource Hub. Subscribe here to receive bi-monthly behavioral health alerts to stay informed about the work of the Task Force and other important resources.

NCSC hosting webinar series on how to "Build-a-(Backlog) Dashboard"

Curious how courts are showcasing their caseload data in real time? NCSC's Rapid Response Team is offering three workshops in the next few months that will reveal the different ways courts can design and display their own dashboards.

The first webinar on Tuesday, May 4 from 3-5 pm EST will show how Massachussetts and Pima County, Arizona have managed backlogged cases effectively through Tableau and Power BI. Presenters will also outline the minimum data necessary to provide useful information to manage calendars. Register here.