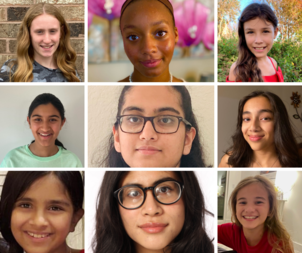 27. That’s the number of Amendments students had to choose from to answer this year’s question: “Which Amendment to the U.S. Constitution has made the biggest difference in people’s lives? Explain how and why.”

“It’s no surprise the majority of students wrote about the First Amendment,” said contest manager Deirdre Roesch. “However, the final judges selected essays that are more focused on creativity and personal experiences. In some cases, the less ‘popular’ amendments were the basis for entries that took first, second and third place.”

Take Santana Spearman’s essay, for example. Spearman, the first-place high school winner from Charlotte, North Carolina, wrote about her grandparents and the impact the 15th Amendment has had in their lives.

“Without the 15th Amendment, my Grandpa wouldn’t be making his election day breakfast potatoes, my Grandmother wouldn’t be packing up the car on election mornings, and most importantly, my Grandparents wouldn’t be included in the United States political process…all because of their race,” she wrote.

Sabina Perez, the first-place elementary school winner from Fredericksburg, Texas, compared the Greek statue of justice to the 14th Amendment.

“She is strong and timeless. She applies the law fairly and equally.… Equality granted in the 14th Amendment makes America a place of pride, justice, freedom, opportunity and success,” she wrote.

Essays were judged by a team of NCSC staff and a finalist panel including NCSC Board Chair and Rhode Island Chief Justice Paul A. Suttell and Mason Farr of the Ohio Supreme Court’s Civic Education Section and recipient of the 2021 Sandra Day O’Connor Award for the Advancement of Civics Education.

Entries were evaluated for their creativity, accuracy, length and grammar. The nine winners will receive cash prizes totaling $3,000. Students from 49 states, the District of Columbia, and 19 countries participated in this year’s contest.

For the past nine years, NCSC has framed its essay contest question around the American Bar Association’s Law Day theme, which in 2022 is “Toward a More Perfect Union: The Constitution in Times of Change.”

Watch, Read, Listen: So You Want to Talk About Race

Join the Blueprint for Racial Justice's Watch, Read, Listen effort this month by reading So You Want to Talk About Race by Ijeoma Oluo.

Designed to promote informal conversations about racial justice among court communities throughout the country, Watch, Read, Listen has generated dialogue about selections including Bryan Stevenson's Just Mercy and Crash by Paul Haggis.