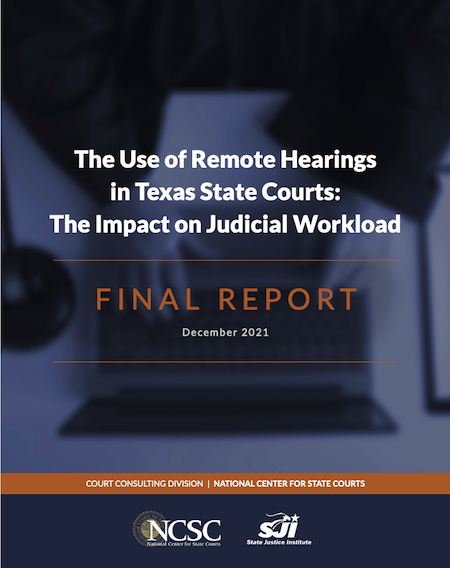 Remote proceedings take about a third longer than in-person hearings largely due to technology-related issues and lack of preparation by participants, according to an NCSC exploratory study of Texas courts. But the study also found that remote proceedings take longer because they increase access to justice, as litigants can more easily attend and participate in hearings.

This first national review of data confirms what judges have anecdotally shared about remote hearings before and during the pandemic. The 12-month study analyzed both 1.25 million minutes of judicial data and focus group feedback from judges and court leaders in eight counties across Texas.

David Slayton, former Texas state court administrator and NCSC vice president for Court Consulting Services, said the study’s findings mostly confirmed what Texas court leaders thought to be true. However, he was somewhat surprised that remote hearings take longer across all case types. That, he said, points to technology being an issue for all courts to address.

Both he and the report suggest that courts can reduce the length of hearings by hiring “technology bailiffs,” who can better prepare remote hearing participants for their hearings and handle technology glitches that occur during hearings.

“We have already begun working on how to implement some of the recommendations from the report,” said Jeffrey Tsunekawa, director of research and court services for the Texas Office of Court Administration. “For instance, there is a need for template instructions and expectations for virtual hearings. Often, valuable hearing time is spent verbally communicating these instructions when they could have been relayed in writing prior to the hearing. We are working to collect samples from across the state to share with other courts. We are also reaching out to courts to collect best practices and suggested practices now that courts have had two years of experience with remote hearings.”

Learn more about the findings and recommendations of this State Justice Institute-funded study here.

New federal policies should result in fewer arrests by federal immigration agents in and around courthouses, according to a recently released research paper written by NCSC advisor James D. Gingerich.

The policies, Gingerich wrote, are the result of President Biden’s executive orders to repeal the Trump Administration’s policy to authorize federal agents to arrest immigrants who happened to be at courthouses. Court leaders, including many state supreme court chief justices, have said a courthouse should be treated as a "sensitive location," arguing that the threat of arrest keeps people from coming to courthouses to conduct important business, such as serving as witnesses in criminal trials or seeking protection from domestic violence.

“The new policies recognize the importance of the courthouse and the public’s access to justice as a ‘core principle,’” Gingerich wrote in Court Review: The Journal of American Judges Association.

Gingerich, who advises and supports CCJ and COSCA committees, is director of the State Courts Partnership, a collaboration between NCSC and the University of Arkansas William H. Bowen School of Law. Beginning March 1, he will serve as the Interim Dean of NCSC's Institute for Court Management Fellows Program.