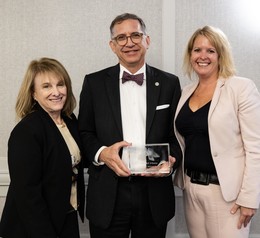 Named in honor of Mary McQueen, the president of the National Center for State Courts since 2004, the award recognizes an individual who has made extraordinary contributions to improving the administration of justice at the local, state and/or national level for a sustained period of time. The award is given jointly by CCJ, COSCA, the National Association for Presiding Judges and Court Executive Officers, and the National Association for Court Management.

“Prompted by the startling number of unprepared pro se litigants appearing on his family court docket, Judge O’Grady worked with a team of judges, clerks, and community stakeholders to establish the Johnson County Help Center. This project grew exponentially by providing guidance, assurance, and options for tens of thousands of court patrons who were navigating the legal system on their own,” they wrote.