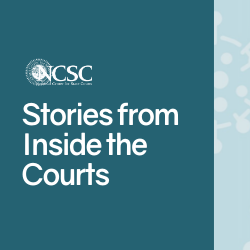 Have information to share about how your court is responding? Submit it to pandemic@ncsc.org.

It remains to be seen exactly how courts will change how they operate in the future, but many states are using video-conferencing to conduct essential court hearings as they limit public access to the courts.

Judges and other court officials are embracing video technology and believe it will be an important tool long after the pandemic ends because of its potential to save time and money and increase convenience for litigants.

“Whether it involves enhancement of our video-conferencing and tele-conferencing capabilities or turning to improved software to conduct hearings from remote locations, we are constantly exploring new modes by which to dispense justice,” said Rhode Island State Court Administrator J. Joseph Baxter, who also serves as vice chair of NCSC’s board and president of the Conference of State Court Administrators.

Judges in states large and small are using videoconferencing like never before.

Last week, for the first time ever, the North Dakota Supreme Court heard oral arguments using a video-conferencing app, which allowed the justices to participate as they normally would, asking lawyers questions and making comments.

“Most of the lights were out Monday at the North Dakota Supreme Court as part of social distancing caused by the COVID-19 pandemic,” the court said in a statement. “But the justices conducted business nevertheless -- simultaneously from locations all over the state.”

Starting last week, Texas began a virtual hearing initiative that will soon include all 3,000 or so of its state court judges. Many types of court proceedings will use video technology to permit all participants to join remotely, with jury trials being one exception. Because most court hearings are open to the public, most judges are livestreaming the virtual hearings using YouTube. 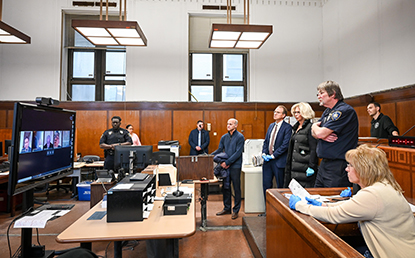 “go virtual” by early April. Video-conferencing began this week in many parts of the state, including in the Rochester area and on Long Island, where judges embraced the new technology.

“Virtual proceedings are the best way to maintain social distancing to reduce the spread of COVID-19 and ensure the continued administration of justice through the duration of the crisis,” said Suffolk County Courts’ Administrative Judge C. Randall Hinrichs.

Have information to share about how your court is responding? Submit it to pandemic@ncsc.org.