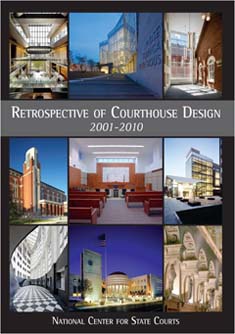 The Retrospective of Courthouse Design 2001-2010, published by the National Center for State Courts, was officially announced at the Academy of Architecture for Justice Seventh International Conference on Justice Design in Boston, Massachusetts, November 17th-19,th 2010.

The Retrospective of Courthouse Design is the only publication of its kind dedicated exclusively to courthouse architecture.  The collection chronicles the major courthouse design trends of the decade, and illustrates the architectural innovations and solutions sought in addressing evolving judicial needs.

There are 95 project examples collected in the publication, featuring a full range of court jurisdictions, including federal, state, local and international courts.

A panel of independent jurors from the design and courts communities reviewed the submittals and awarded citations to 14 exemplary design projects.