Many courts have made case-related materials available, including opinions, orders, briefs, and even oral arguments in recorded and written form, as previously shown. These releases are valuable resources for legal professionals and their availability can provide citizens, journalists and other public officials a view of the outputs and inputs of the judiciary’s highest courts that can engender greater understanding and trust.

However, all of these documents are produced for purposes other than the general education of the public and the information of news media. In fact, persistent arguments against providing access to court hearings and arguments are that such proceedings can easily be misunderstood or that judicial actors will alter their participation, consciously or otherwise, for a wider audience.

Evidence suggests that journalists often lose the nuances of court processes in their coverage. Stories on the U.S. Supreme Court, for instance, frequently report docketing decisions, specifically denials of certiorari, as if they were decisions on the merits of the underlying cases. Court watchers disagree on how much one can infer about what the justices think of a case from a denial of review, but stories about such actions can suggest that denial of review is procedurally equivalent to an affirmance.

The online age that allows courts to make their work product available has also led to evolutions in the news media that are likely to contribute to such problems. An example from New Jersey illustrates: the state high court denied a Special Master’s motion requesting more specific guidance in a prominent dispute that raised state budget issues, but the court’s denial allowed the Master to consider whatever evidence he deemed relevant. A reporter with no background in the court or legal issues wrote a story on the action, characterizing the court’s decision as forbidding the Master from considering wider budgetary matters, reversing the practical effect of the denial.

The mistake was corrected only after the story had been picked up by other news outlets and a legislative inquiry begun. Cutbacks at traditional print and broadcast media make it increasingly likely that court actions will be covered by reporters without substantial knowledge or experience with the judiciary, raising the risk of court outputs being misinterpreted. Furthermore, evidence suggests that a newspaper’s resources, rather than proximity to the court, is a more important factor in the extent of its coverage of state high courts.

Some high courts have attempted to address these concerns by providing summaries of cases appearing before them, written in a journalistic or “plain English” form to make clear the meaning of actions the court takes. Summaries of the court’s decisions made available as references for journalists and the public address the worry that other outputs of the court will be misinterpreted or mischaracterized in the public sphere.

Illinois posts a brief summary, typically a few paragraphs, for each opinion issued by the court. The summaries are included on the page listing recent opinions, which can be sorted by various features, but appear by default in the order they are released, newest first:

The summaries mimic the appearance of the opinions themselves and while they are shorter and far less reliant on legal terms of art than opinions, they do feature language taken from them.

Interest in high court cases dealing with matters of public controversy or import will precede the disposition of the case, which has led several courts to provide summaries of the procedures and issues of pending cases, usually before oral argument. The Massachusetts Supreme Judicial Court combines its links to oral argument webcasts with brief, one-sentence synopses of the issues for each case. 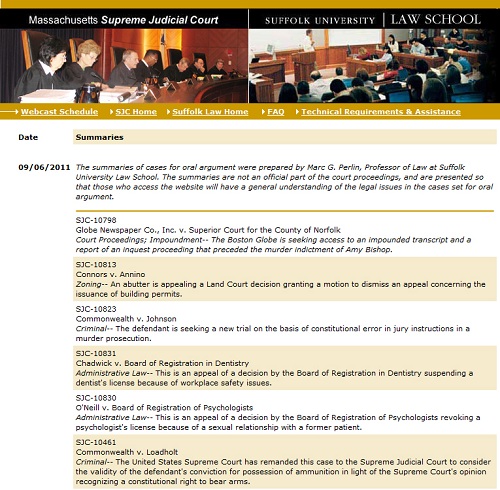 The brief summaries are written by Marc G. Perlin, a professor at the Suffolk University Law School, which hosts the website for the state high court’s oral arguments.

Summaries of opinions and other court proceedings pose several difficulties. First, of course, is that such products are much more work-intensive than providing direct access to other court outputs like opinions, orders and arguments -- materials that the court is already producing for other reasons. Also, for summaries to provide accurate meaning and context to other court outputs they must be prepared by someone competent and knowledgeable enough to understand those outputs and able to communicate them in language appropriate for a general, lay audience. Interest in summaries is likely to be greatest for controversial and consequential judicial activities, meaning that those summaries must be prepared with adequate sensitivity and circumspection. Court officials are bound to want some oversight of case summary contents, especially if they are more than brief restatements of the issues presented.

As noted above, some courts have partnered with other institutions, such as law schools, to provide the personnel and expertise necessary to create summaries for impending and decided cases. Other state courts have devoted staff resources to the task of summarizing court outputs. Ohio’s high court, for instance, has its Public Information Office summarize decisions. Ideally, all of a court’s pending and decided cases would receive some explanation in a manner friendly to the press and public, but the demands of doing so can be beyond an overburdened court, particularly one with a large caseload.

While some states offer summaries of cases decided by the court, other states choose to produce summaries of pending cases, scheduled for oral argument, or accepted for review. The California Supreme Court’s Public Information Office produces a weekly newsletter that identifies the cases accepted for review by the court in that week along with a brief statement of subject matter and issues presented. 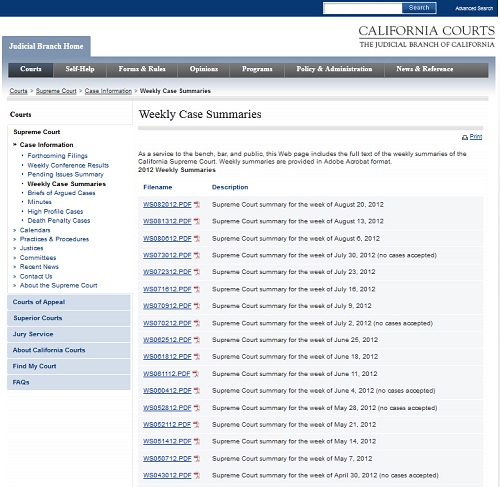 The Wisconsin Supreme Court also offers case summaries for all pending cases. The case summaries are posted online and distributed monthly in conjunction with the oral argument schedule. This approach has been popular with reporters as it has allowed them to easily understand the issues and make determinations about which cases to cover. This practice is handled by the public information office and has been in place for 18 years.

An alternative approach seeks to identify cases that are likely to be of interest to a wider group of observers and to prepare materials that accurately characterize the dispute and the court’s involvement with it. The Florida high court offers, among its public information materials, a High Profile Cases page: 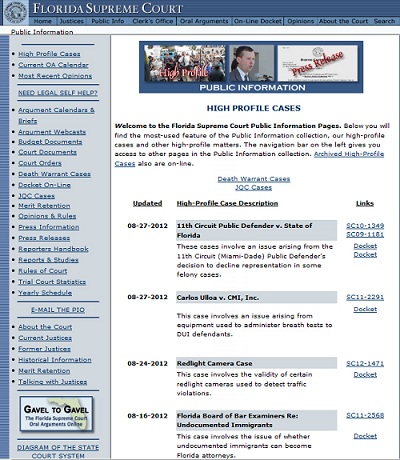 Only a brief description of the matter is provided on the initial page, but the cases profiled include upcoming as well as decided disputes, and links to the briefs and docket accompany each description. The PIO and court clerk agree on when a case should be included on the high profile cases page. Once a case is deemed high profile, an order is entered requiring all filings to be entered electronically from that point forward.

An archive of high-profile cases going back to 2000 is available, as are links to pages devoted specifically to death warrant cases and proceedings before the Judicial Qualification Commission.

“The way we handle high-profile case filings has greatly increased the public profile of the Florida Supreme Court, far beyond what existed before. And that means the Court is featured in far more news articles with far more accurate coverage than in earlier times. Constantly communicating with the public in this way – especially in a Court that produces so much hard news – means that people take the Court more seriously than before. And because we are the point of first contact about such news, the press and the public get our side of the story first.”

In addition to its summaries of accepted cases, California’s court also devotes a page to high-profile disputes. For these cases, thought to be of particular interest to the public, the court offers access to materials that give some context to the dispute, such as case documents, summaries of decisions during the life of the issue, and links to audio and video of oral arguments. 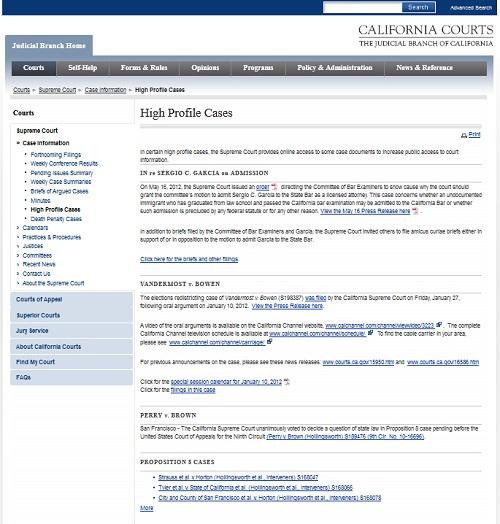 Along with its other features, the Ohio Supreme Court writes opinion summaries for selected cases. A dedicated staff member in the public information office prepares the summaries and, following a practice common among courts, includes a disclaimer that the summaries are for informational purposes only, not to be confused with headnotes or syllabi. It’s unclear how actions are chosen for summary, but it appears that all disciplinary actions taken against attorneys are given coverage. 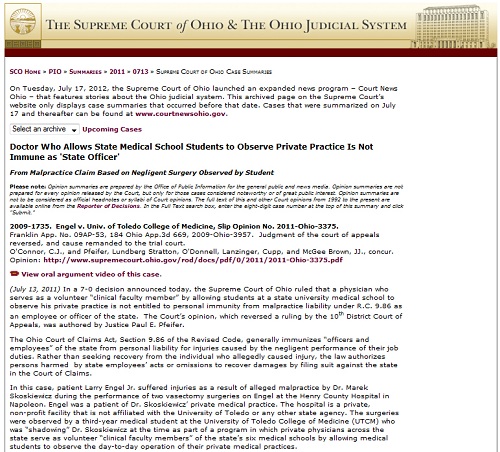 The Ohio summaries are written in a journalistic style, covering case background and facts with a who/what/where focus aimed for public consumption, not reporters or the legal community.

The Kansas courts post opinion summaries for selected cases written by Ron Keefover of the Office of Judicial Administration. An average of eight to 10 opinions each year have summaries, ranging from a few sentences to several paragraphs in length, going back to 1996. 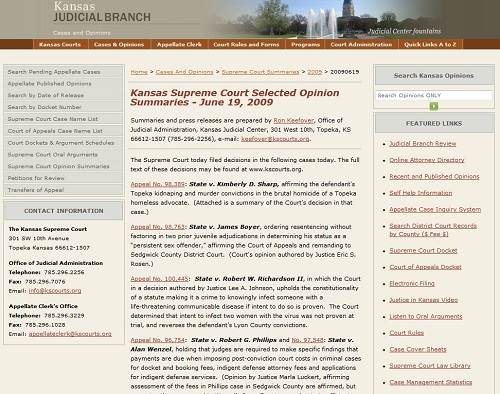 The Wisconsin Supreme Court hosts a feature referred to as “Case of the Month,” which highlights one of the cases argued each month in the court. The case receives a description of a few sentences, a fuller review of the factual and procedural background, and links to the lower court decision being reviewed, briefs for the supreme court’s review, and an audio file of oral argument. The review can also be downloaded in PDF format. Only one case is so treated per month, and the feature is intended more for educational use than public information.