A publishing medium that is old hat to the private sector, blogging has not been embraced widely by state courts.

Only a handful of tentative steps have been taken, but hosting a blog is a sensible development for a state supreme court that can, like an integrated calendar, extend and concentrate more common features. Blogs are an important component of so-called “new media” journalism and can serve as a friendlier home for schedule and opinion release announcements, case summaries and news bulletins that some courts are already distributing via RSS feeds or listservs.

Again, North Dakota illustrates the possibilities of a court-hosted blog with its front page.

Combining announcements of opinions or administrative matters with links to other online content like news stories or blog posts of interest to visitors, North Dakota’s page gives readers the impression of an ongoing conversation between the court and its audience. 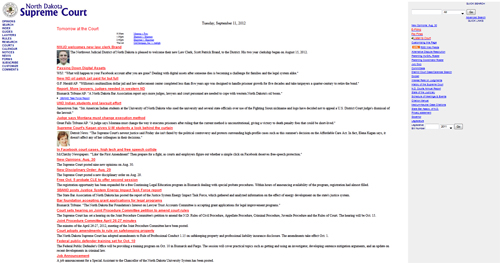 North Dakota has been producing news on its website like this since 1996 and they have archived the daily news items going back to that date. In addition to posting the daily news on the website, it is also sent via email to those who have signed up for it.

"The response to the daily news items on the website has been positive. ... It helps people keep their finger on the pulse of the legal world in North Dakota and the states around us."

The Indiana Supreme Court website offers a few different blogs. Each focuses on a separate subject. 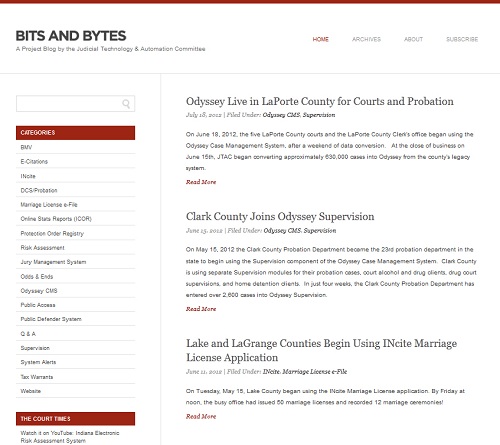 The “Case Clips” blog provides abstracts of selected Indiana appellate court decisions, as well as opinions from the 7th Circuit Federal Court and U.S. Supreme Court. Each opinion abstract provides a link to the full opinion. The blog also offers the ability to sort by case type, court and judge. The blog is managed by the Indiana Judicial Center, the staff agency for the Judicial Conference of Indiana. 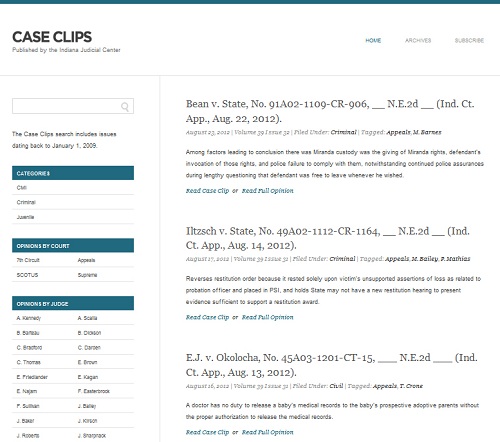 The Indiana Judicial Center also publishes a legislative update blog that provides a weekly summary of bills of interest to the judiciary:

The Supreme Court of Illinois engages in “microblogging” via a Twitter account (@illinoiscourts), posting announcements of rule changes, argument schedules, news and opinion releases and other content.

Twitter is a simple way to permit followers to keep up to date with announcements via portable devices. Recipients can forward individual updates to other users easily, compared to an RSS feed or listserv. A Twitter follower can also visit the court’s feed in a browser, which constructs a webpage with some similarity to a traditional blog (if one can refer to something that has only existed for a decade or so as "traditional.")

"The use of Twitter provides an additional opportunity for the Supreme Court to broaden its distrubution of information regarding the Illinois courts. ... Twitter provides a means to reach a younger audience and respond to the rapidly growing number of people using mobile devices."

Much like Illinois, Florida also uses twitter (@flcourts) to provide links to newsworthy information on their website. All of their tweets contain links to items such as opinions and press releases.