Social media are dramatically changing the online experience for people all over the world, and some courts are already experimenting with web presences on social networking sites like Facebook.

More courts, however, have embraced Web news feed formats such as RSS and listservs that send content out to subscribers, rather than making them visit the court’s website for new content.

RSS stands for Really Simple Syndication, an apt descriptor for a service that permits users to easily subscribe to a stream of content from a website, podcast host or other provider. The content is formatted using XML, which allows it to be read by a wide variety of platforms. Subscribers access the feeds through an aggregator, which allows them to read the content through browsers, desktop applications or mobile device apps. Feeds like RSS or Atom allow users to receive frequently updated content efficiently in a timely fashion.

The Arkansas Supreme Court has a page for its feeds, one of which syndicates the oral argument schedules for the supreme court and court of appeals, while the other is for news releases: 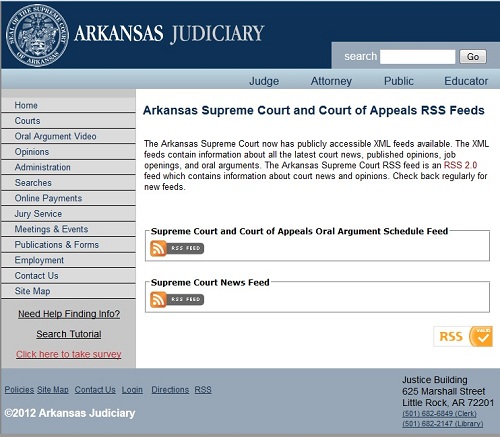 The Supreme Court of Ohio, at the other extreme, has no fewer than 20 RSS feeds, one for each of the justices as well as individual feeds for case announcements, opinions, summaries of rule changes, various administrative actions, bar admissions, commission activities and news releases. However, Ohio is considering streamlining their feeds and removing some of these options to make it easier for users. 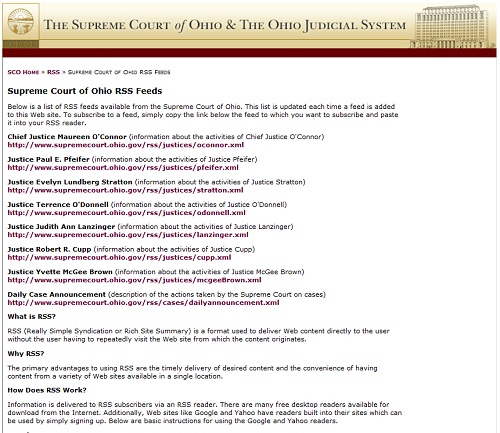 The page listing Ohio's feeds also includes a tutorial on RSS feeds at the bottom of the page.

The Tennessee Supreme Court offers RSS feeds for all appellate court opinions, news releases and the supreme court’s weekly discretionary appeals list. Tennessee uses a feed management provider called Feedburner, purchased by Google in 2007, to deliver its RSS feeds, allowing the ability to track the number of subscriptions for each feed.

Visitors can also choose to subscribe to these feeds via email: 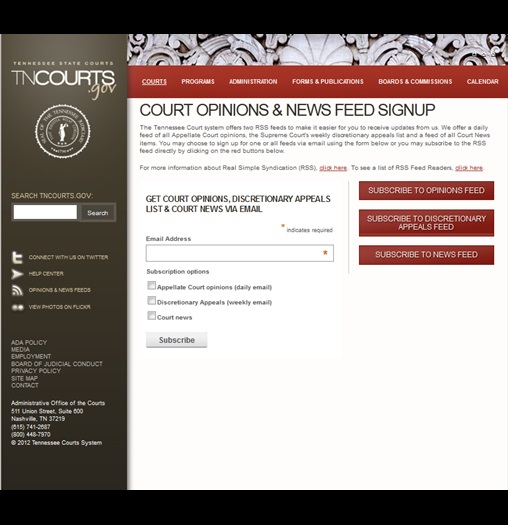 Individual RSS feeds serve as an electronic tip -- essentially in real time. ... I encourage reporters to use this because it reduces the number of 'when will the court...' calls."

In addition to feeds for news releases, opinions, rules, orders and oral arguments, Wisconsin also offers the ability to subscribe to RSS feeds for individual cases. This allows reporters, attorneys and members of the public to stay up-to-date on the latest filings in cases they would like to track and follow. 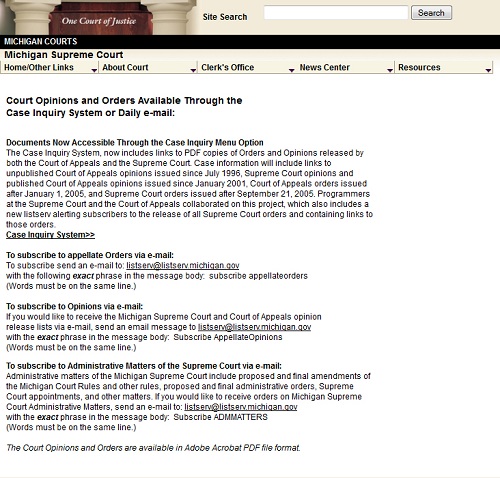