Issues of Excessive Fines Coming to a Court Near You 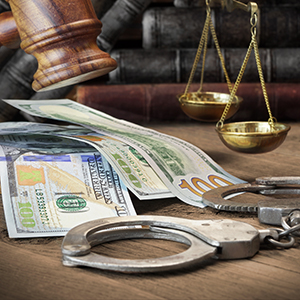 The U.S. Supreme Court is considering applying the Eighth Amendment’s Excessive Fines Clause to the states. Will this affect the assessment of court costs and fees, in addition to fines?

The U.S. Supreme Court has ruled that the Eighth Amendment’s Excessive Fines Clause applies to the states. Will this affect the assessment of court costs and fees, in addition to fines? This article was originally published in January of 2019, ahead of the Court’s February 20, 2019 decision.

Mention of the Eighth Amendment to a lawyer usually draws to mind the Cruel and Unusual Clause, instead of the often-overlooked prohibition against excessive fines. On November 28, 2018 the U.S. Supreme Court heard arguments in Timbs v. Indiana. The case involved the forfeiture of a vehicle involved in a drug arrest. The central issue and basis of appeal was the application of the Excessive Fines Clause of the Eighth Amendment to the individual states.

Justice Gorsuch summarized the issue by his question that, putting aside its application, “we all agree that the Excessive Fines Clause is incorporated against the states. . . . Can we least agree on that?” From their questions, other justices seemed to agree with Justice Gorsuch.

Although there have been some state and federal court cases that have applied the Excessive Fines Clause, there has not been a definitive statement by the U.S. Supreme Court of its application to the states. Regardless of the determination of the validity of the forfeiture, it appears from the justices’ questions that this case will put to rest any issue of the protections from the Excessive Fines Clause being applied to the states.

As Justice Kagan pointed out in the argument, the issue includes both the incorporation and scope of the Excessive Fines Clause. If the Court does decide that the Excessive Fines Clause applies to the states, the question is how to determine what a fine is and when is it excessive. This question may have a substantial impact on courts dealing with traffic and misdemeanor cases.

Cases that have raised issues of traffic and other misdemeanor fines usually involve a direct appeal on the lack of hearing or finding on ability to pay or injunctive relief in federal court on collection methods. A claim based upon the Excessive Fines Clause challenges the fine itself.

The Excessive Fines Clause limits the government’s power to extract payment as punishment for an offense. A fine is excessive when it is grossly disproportionate to the gravity of the offense that it was designed to punish. United States v. Bajakajain, 524 U.S. 321 (1998). Courts must also defer to the legislature regarding the appropriate range of punishment for an offense.

As was raised during the Timbs oral argument, the determination of an excessive fine is fact-intensive. The factual nature makes it difficult to set out an articulable standard without impeding judicial discretion at the trial level. This issue was also brought out by the justices’ questions during the Timbs argument.

Excessive-fine analysis usually looks to the level and nature of the offense and the fine or forfeiture relative to the offense. With a low-level offense, the analysis may look to the financial impact on the defendant. Courts have been divided about considering the defendant’s ability to pay as a factor in determining if a fine is excessive.

The purpose of a fine is to correct inappropriate behavior and to maintain a standard of conduct. As the lowest sanction available to a court, it is the primary sanction for a traffic infraction or minor misdemeanor offense. When, however, fines are looked on as a local revenue generator, it shifts the emphasis from the impact on the defendant as a financial sanction.

In addition to the amount of the fine, collateral consequences flow from inability to timely pay, including suspending a driver’s license; blocking registration to renew license plates or register a car; paying collection-agency fees; and, in some cases, issuing an arrest warrant. Most of these collection methods are applied to low-income defendants. As such, there is a disproportionate impact of a fine based upon ability to pay or the financial status of the defendant.

The Excessive Fines Clause applies to all punitive payments, regardless of their label. Timbs involved a forfeiture of a vehicle, in addition to fines imposed. Fines usually include court costs. While a fine is a penalty, court costs are civil in nature and imposed to defray the operating costs of the court. Regardless of this distinction, it is money that comes out of a defendant’s pocket and can have a devastating impact on the defendant’s life, as well as that of his or her family.

Many courts are generally expected to generate their own costs of operations by fines and court costs. Over time, the distinction between fines and court costs has been blurred when collection methods for fines have been extended to court costs and the two are viewed together as far as court revenue. Even if some collection sanctions are limited to fines only, they may effectively be applied to court costs if fines are not received until after all other financial sanctions have been satisfied. Moreover, when revenue generation is a consideration, the amount of the fine is based on factors other than the severity of the offense.

Another critical distinction between fines and court costs is that as a penalty, the legislative authority will set the range of a fine. The court, on the other hand, generally sets some or all of its costs. As such, the court acts autonomously with no check and balance, which was considered a critical factor by the Court in Bajakajain. Often, court costs may exceed the fine imposed. As a result a fine of “$50 and costs” for a single, relatively minor offense can be $400 to $500 at the clerk’s window.

The challenge for municipal and other traffic and misdemeanor courts with high-volume, low-level offenses is to determine the ability to pay, either at the time the sentence was imposed, or at the collection stage, before imposing any collateral collection sanctions. If the Court in Timbs applies the Excessive Fines Clause to the states, the trial court record showing the factors considered by the court will be critical.