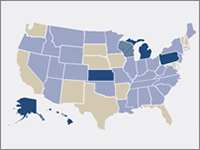 State courts face difficult budgetary decisions as a result of economic conditions. The salaries of federal judges are protected by Article III, Section 1 of the Constitution of the United States; it states that the salaries of federal judges “shall not be diminished during their Continuance in Office.” NCSC identified the states that have constitutionally insulated their state’s judicial salaries from any reductions.

The National Center for State Courts conducted a survey of all fifty states to gather detailed information related to the processes used by states to set judicial compensation and judicial salary increases.