After a multi-year investigation, the National Judicial Opioid Task Force (NJOTF) on November 20, 2019, released findings, recommendations, and solutions on the role of state courts in addressing the crisis of addiction. The task force was formed in 2017 by the Conference of Chief Justices (CCJ) and Conference of State Court Administrators (COSCA).

Task Force final report. This report details recommendations, tools, best practices, and examples of successful programs so that state courts can serve as effective partners in the management and eventual end to the addiction crisis.

Task Force products. This collection of tools was created by the National Judicial Opioid Task Force to assist courts in addressing the opioid crisis.

About the task force

Created in August 2017, the NJOTF's primary focus is to make recommendations to courts at every level to support the judiciary in helping individuals successfully recover from opioid use disorder and lead drug-free lives.

Shortly thereafter, the executive committee developed five principles for state court systems to use as a point of reference in addressing the crisis, and through numerous informational briefs, bench cards, presentations, and videos found in the NJOTF Resource Center for Courts the Task Force has addressed each of the six needs to aid state courts in their battle against opioids. 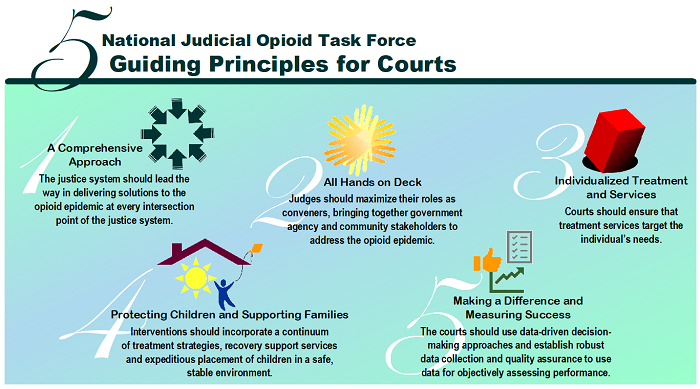