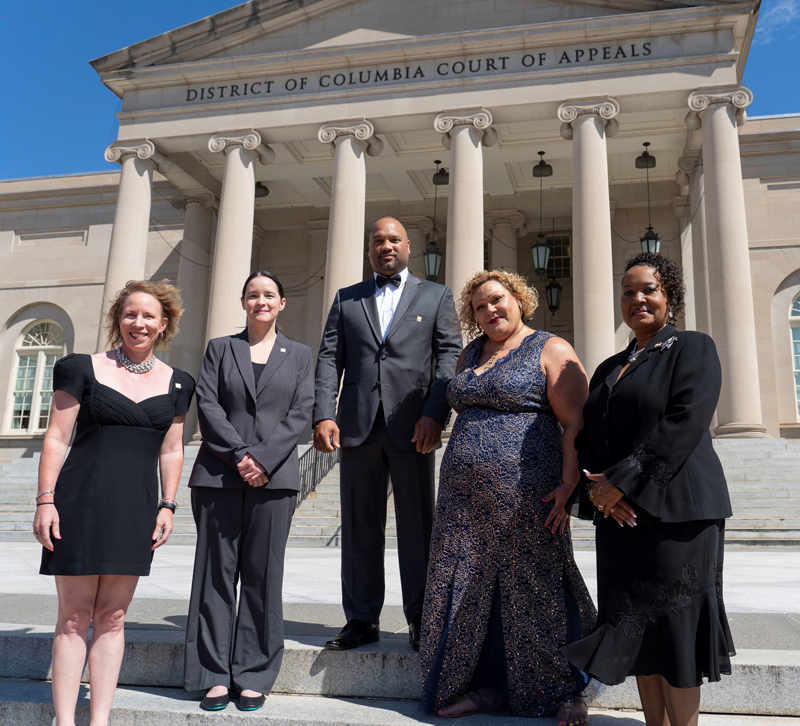 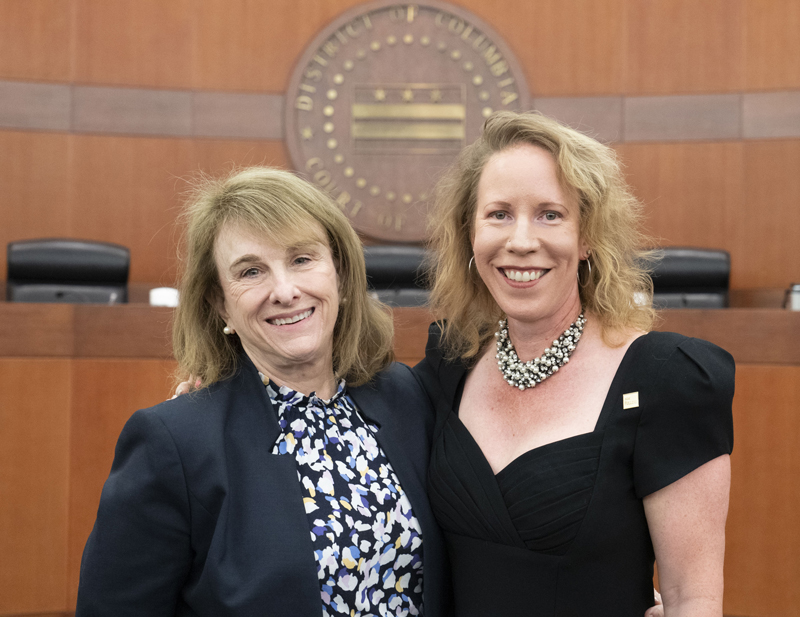 The Vice President of ICM presents the Award of Merit for Applied Research to the ICM Fellows Program graduate who completes the most outstanding court improvement project in each graduating class. Jill Houck, Operations Division Manager/Assistant Trial Court Administrator for the Superior Court of New Jersey – Vicinage I, Atlantic and Cape May Counties is the 51st Class recipient. NCSC’s Kathryn Genthon, Senior Court Research Associate, provided guidance to Ms. Houck as her Project Mentor.

This paper is important because it not only shares quantitative data about the impact of New Jersey’s drug distribution laws, but it also shares the perspectives of those involved with the criminal justice system in several different roles. It also provides several recommendations to resolve the issues highlighted by the paper. While the main problem is a legislative one, it also offers recommendations for actions that help increase equity without changing the law.

Jill Houck is the Assistant Trial Court Administrator and Operations Division Manager for the Superior Court of New Jersey in Atlantic County. She oversees jury management, the interpreters’ unit, records management, and transcription services and serves as the ADA Coordinator. Jill has worked for the Judiciary for over 16 years, previously serving as a probation officer, team leader, Assistant Criminal Division Manager, and Criminal Division Manager. Jill has been asked by the New Jersey AOC to serve on several statewide committees, most recently serving on the Post-Pandemic Planning Committee on Resuming Jury Trials.

Beyond her primary responsibilities, Jill has steered the expansion of community outreach in her court, following her true passion for achieving access and fairness for all. In 2015, she developed an innovative approach to outreach, meeting court users where they are.   This resulted in the Atlantic City Bus Station initiative, which was awarded the Mid-Atlantic Association for Court Management John Neufeld Award in 2020 and was also recently highlighted in the National Center for State Court’s Trends Publication.In 2018, Jill was also presented with a Community Service Award from the Atlantic County Coalition for a Safe Community for her community outreach efforts. Jill holds a BA and MA in forensic psychology from John Jay College of New York City. 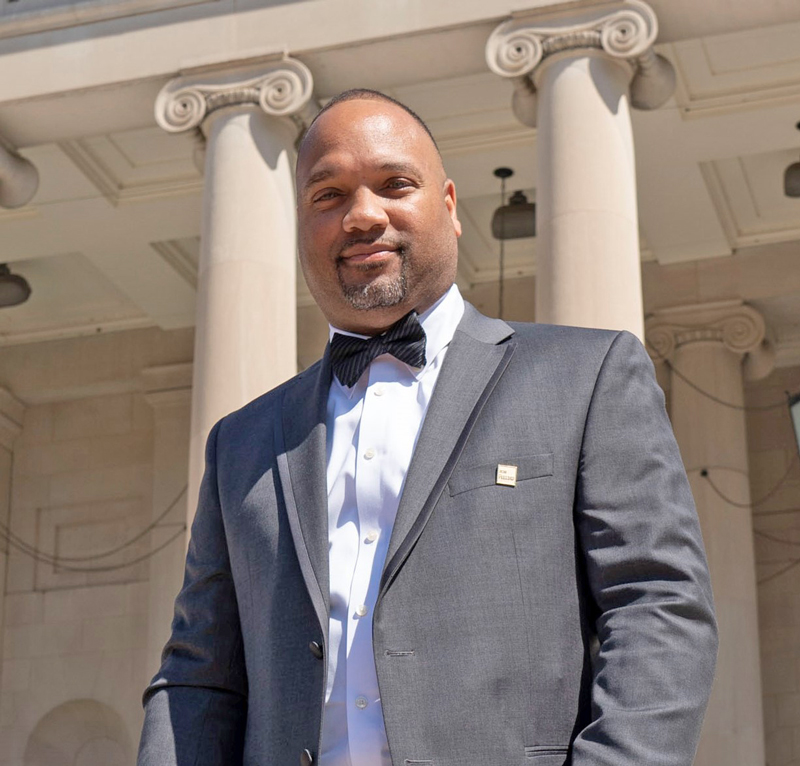 The Class Spokesperson is chosen by their classmates to represent them at graduation. The 51st class chose Charleston L. Carter, Civil Division Deputy Director of the Washington, D.C. Superior Courts. The text of his speech follows.

Allow me to reflect.

A young boy once approached Socrates with the desire to obtain wisdom. Without saying a word, Socrates led the young boy down to the edge of the sea and walked in, beckoning him to follow. When they were standing waist-deep in the water, Socrates pushed the young boy down, completely submerging his head. Socrates held him down for a couple of minutes before letting him up. Sputtering, grasping, and angry, the young boy demanded to know why Socrates had held him underwater for so long. In response, Socrates asked, when you were under the water, what did you want more than anything in the world?
After a moment's reflection, the young boy answered, I wanted to breathe.
Ah, Socrates replied. When you desire wisdom, knowledge, and leadership skills as much as you desired to breathe, it is then that you shall have it.

I want to thank the National Center for State Courts for sharing your professors, teachers, advisors, and other staff with us during this worthwhile educational journey. With certainty, my colleagues understand that the staff represented Socrates in the story. As we were held down under the water, various emotions enveloped us: impatience, anxiety, frustration, self-doubt, and hopelessness. Fellow colleagues, please know the National Center for State Courts staff didn’t mean any malintent from their actions, but only represented our best interest in our pursuit of becoming an informed court professional as we emerged slowly from the water. Once we emerged, other emotions enveloped us: patience, trust, inspiration, confidence, and hopefulness.

Because of the experiences we have acquired over the years in the Institute for Court Management program, we will not forge ahead unarmed. We now have a certain amount of wisdom gained through experience and time that we did not have before. Of course, we will still make some mistakes, and we will stumble along the path - but if someone knocks you down in the process, make sure you land on your back, because if you can see up, then you can get up, and if you can get up, then you can stand up, and if you can stand up, you can face the obstacle you faced before, but this time you will beat it.

I want you all to know that you are Champions. Give yourself a round of applause.

There is a poem by Walter D. Wintle that is entitled the Champion Creed, and it says:

If you think you are beaten, you are.

If you think you dare not, you don't.

If you'd like to win, but you think you can't,

It's almost a cinch that you won't.

If you think you'll lose, you're lost.

For out of the world we find,

Success begins with a fellow's will,

It's all in the state of mind.

If you think you're outclassed, you are

You've got to think high to rise,

you've got to be sure of yourself before you ever win a prize.

But sooner or later the man who wins is the man who thinks he or she can. Fellow Champions, what is next? We must put our gifted minds and humble hearts into all that we do and breathe with all the passion within us, and when it is said and done, our lives will speak the answer to the question that still remains, are you wise? 5.4.3.2.1 – You are Breathing! 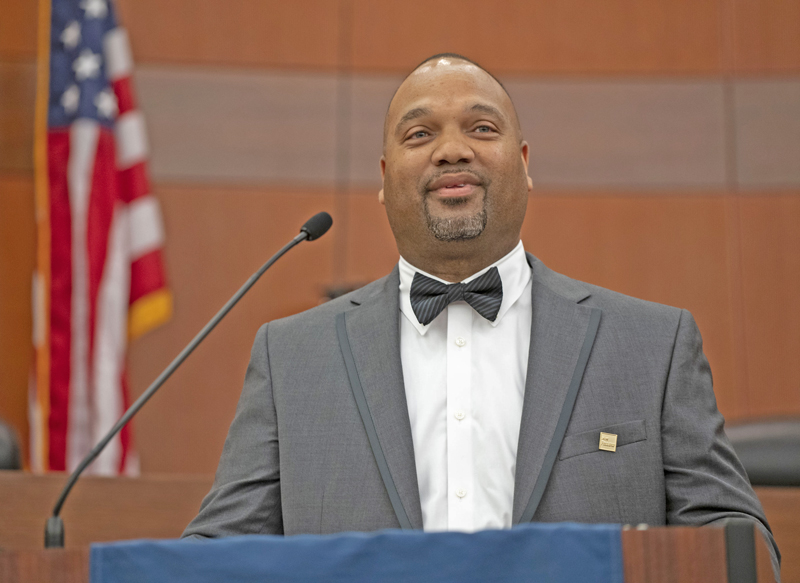 Charleston L. Carter is the Deputy Director for Superior Courts of Washington, D.C. Mr. Carter serves as the principal adviser to the Director of the Civil Division, keeping the Director abreast of division operations, projects, and programs. He directs the day-to-day operations including administration, case management, courtroom support, and quality control. 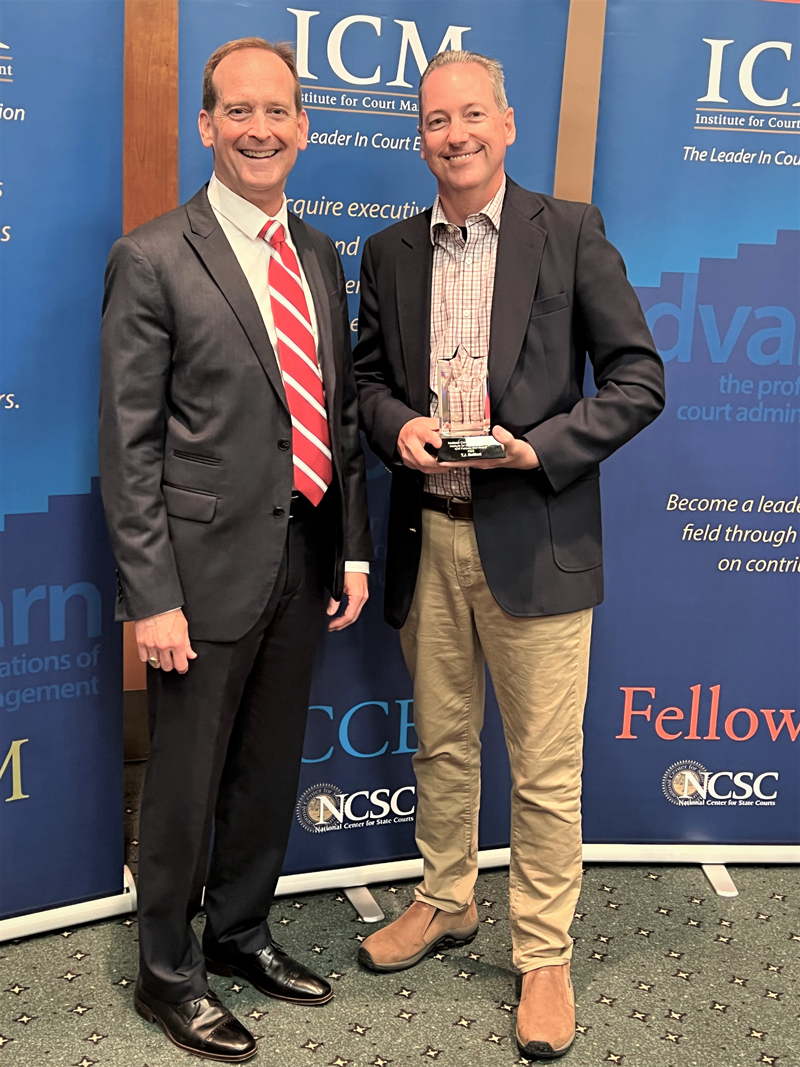 The Star Award is conferred on an ICM Fellow who demonstrates excellence in the advancement of court administration through leadership and education. The Award recipient is usually announced at a Fellows reception held at the annual conference of the National Association for Court Management.

Tracy "T.J." BeMent is the recipient of the Institute for Court Management (ICM) Fellows Star Award. When asked to describe T.J., ICM staff used words like polished, energetic, dauntless, and generous. He is an accomplished court administrator with a sophisticated understanding of numerous topics who can present and discuss them all in a very relatable way.

T.J. used his subject matter expertise to assist in developing the Executive Decision-Making curriculum. In addition to this assistance, T.J. is a prolific instructor for ICM. Over the past two years, he served as an instructor for eight courses, receiving high ratings on course evaluations.

He was also part of the Georgia Council of Court Administration (GCCA) leadership when they, along with the Georgia Administrative Office of the Courts (AOC), signed a Licensee agreement with ICM. This allows the GCCA and the AOC to provide CCM and CCE courses using state faculty, providing greater access to ICM professional development opportunities to court personnel in Georgia.

By his support of professional development for court employees in Georgia, and his dedication to sharing his knowledge with others, T.J. helps ICM further its mission to educate, inform, and support current and future state court management and leadership.

Tracy "T.J." BeMent is the District Court Administrator for the 10th Judicial Administrative District of Georgia. The 10th District includes the general jurisdiction superior courts in 6 circuits covering 21 counties in Georgia. T.J. received his undergraduate and graduate degrees from the George Washington University in Washington, DC and is currently pursuing a doctorate in Public Administration from Valdosta State University. T.J. is also a Fellow of the Institute for Court Management, a Past President of the National Association of Court Management, and National Center for State Courts Board Member.

Each ICM Fellow prepares a comprehensive report on a court project that he or she undertakes as a contribution to the improvement of court administration. Projects are often selected to address specific challenges experienced by a court or state judiciary, but have broader implications for innovation, operation and management of the courts. Court projects prepared by recent Fellows graduates are linked below by class year; earlier court projects can be accessed by searching NCSC’s online library catalog or eCollection.