State of the State Courts 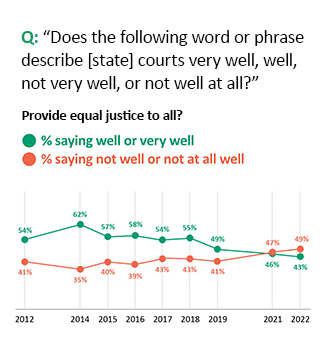 NCSC’s 2022 survey of public opinion finds that public trust and confidence in the courts continues to slide. If courts wish to remain the most trusted branch of government, this slide must be halted.

Just as troubling, Americans are losing faith in the courts ability to deliver on the key promise of equal justice for all. On this measure, the gulf between white and people of color is wide.

However, there are positive messages that help distinguish the critical role of the state courts. Courts must adopt these messages, while emphasizing how courts are accountable to the law.

Finally, there is overwhelming public support for courts to lead on America’s mental health crisis.

In this 2022 State of the State Courts survey, we see greater movement on key tracking measures than we have seen in nearly a decade of annual surveys, as events in the broader political environment and key Supreme Court decisions have combined to dramatically impact the way many Americans view the judicial system at all levels.

Every year, this survey serves as a reminder that most Americans are not focused on the court system in their daily lives and have only the most rudimentary understanding of how these systems work. Educational messaging can move public opinions in the short term, but such messaging has to start from an understanding of how little time most Americans ever spend contemplating the issues that consume those working within the court system every day.

Read the full National Survey Analysis of the 2022 State of the State Courts survey here.

The poll of 1,000 registered voters was conducted using online surveys. Respondents were contacted between October 22-25, 2022. Findings are considered accurate within +/- 3 percent, 19 times out of 20. The survey was developed by GBAO, with input from an advisory body of judges, court professionals and NCSC staff.