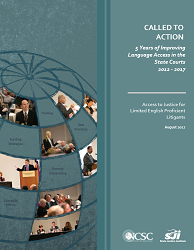 Five years have already passed since state court leaders from across the country convened at the 2012 National Summit on Language Access in the Courts and since the subsequent release of the publication A National Call to Action.  At the Summit, representatives from 49 states, 3 territories, and the District of Columbia convened.  What resulted from the Summit and the Call to Action was a new level of collaboration and focus that assisted the language access community to effectively and efficiently create solutions to language barriers in the state courts. During the past 5 years since the Summit, jurisdictions across the country have made significant improvements in providing language access services. Read more.