The Warren E. Burger Award for Excellence in Court Administration 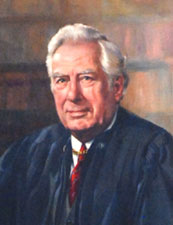 The Warren E. Burger Award honors the late Chief Justice of the United States, who was instrumental in founding the National Center for State Courts and its Institute for Court Management.

Chief Justice Burger was a staunch supporter of the mission of the National Center for State Courts to improve judicial administration through leadership and service to state courts.

This prestigious award honors a person, other than a sitting judge, whose service, over a career or substantial period of time, has significantly contributed to improving the administration of the state courts. Service may be at the local, state, or national level.

Nominees must meet the following criteria:

The following information must accompany each nomination:

Solicitation of nominations is sought from members of the NCSC Board of Directors, its advisory committees and associations for which NCSC serves as secretariat. Any person interested in improving the operation of state courts may submit a nomination.  The 2023 nomination deadline will be announced this summer.

The Governance and Nominations Committee of the NCSC Board of Directors serves as the selection committee for this award. The Committee may consider nominations on its own motion. Nominations are solicited annually. When a nominee is selected, the award will be presented at a time and location mutually agreeable to the recipient and NCSC.